The Concordance of Elements faction (or just the Concordance for short) within the Pathfinder Society is an extraplanar operation that seeks out elemental imbalances, planar breaches, and extraordinary natural phenomena to close breaches, re-establish natural order, and study the multiverse in all its splendour. To fail in this is to allow rampant growth to choke out all life, stand by as one plane's power snuffs out the life of another, or watch as the cosmos spins out of alignment.[1][2] 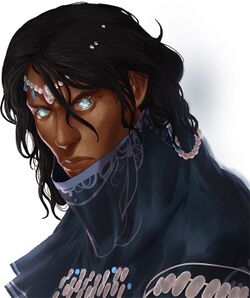 Ashasar, Liaison to the Seat of Balance.

The Concordance is an ancient and diverse organization whose membership spans multiple planes, with a particular focus on the elemental planes. Its members take great interest in the interplay among the primal forces of air, earth, fire, and water. They believe that the stability of the multiverse ultimately depends upon these forces—and many others—remaining in balance.[3]

Each member has her own ideas about how to maintain this equilibrium. Some of them set upon a perilous quest for understanding in places where elemental forces are at their strongest, from howling blizzards to ferocious thunderstorms to active volcanoes. Others seek to refine the balance within, mastering magical forces or fighting styles that evoke multiple elements. Still others search for yawning planar rifts and other massive disturbances to study or seal away.[3]

As an organization, the Concordance believes that each individual member's personal journey of discovery is important. Its leaders, collectively known as the Cycle of Five, spend much of their time in meditation and reflection, leaving its agents free to act with relative autonomy. Of course, agents who contribute more to the Concordance's collective knowledge and overarching goals gain deeper access to its ancient reservoirs of elemental knowledge and power. Such ambitious agents would do well to seek out opportunities to make a name for themselves. Fortunately for Pathfinders interested in gaining influence, the Society's contact in the Concordance is a direct emissary to the Cycle of Five. He is the faction leader: Ashasar, Liaison to the Seat of Balance, a suli druid with an airship-shaped air elemental companion, as well as three other elemental companions.[3]

The Concordance brings to the Pathfinder Society a fresh perspective on Golarion combined with a rich reservoir of planar and elemental knowledge. The Pathfinder Society has shown the Concordance that Golarion is a world worth exploring in much more detail. From the erratic magic of the Mana Wastes to the Abendego-battered Sodden Lands, the Concordance has just begun to scratch the surface. The Concordance is a nature faction, but it is not a typical nature faction. Its members respect nature, and typical nature-themed Pathfinders like druids and rangers are quite welcome in its ranks. However, it is more likely to find someone in the Concordance trying to channel the essence of a hurricane than you are to find them attempting to befriend every plant and animal they meet.[3]