This article covers the spaceship that crashed into Numeria during the Rain of Stars. For the concept of divine power, see deity and divine magic.

The Divinity was a massive spaceship from the planet Androffa, charged with spreading technology and advanced civilization. The Divinity and the train of ships it supported crashed on Golarion in -4363 AR after a battle with the Dominion of the Black, an event known to Golarians as the Rain of Stars.[1]

The Divinity was made from glaucite. It was outfitted with numerous cameras and laser turrets spread across the decks; artificial gravity generators; as well as the wormhole-generating Divinity Drive, which required a wide surface area relative to its mass, leading to a large part of the ship being inaccessible structural voids. The Divinity was divided into numerous decks, connected via lifts and monorails:[2]

Android crèche
Most of the Divinity's androids were manufactured here, and became undead after the crash, led by a creature whose body consists of three merged androids.[3]
Astrogation deck
A small deck, where navigators charted the stars and performed the calculations necessary to open wormholes.[4]
Cargo hold
A heavily damaged deck, where the gravity pumps no longer function, and which has been taken over by powerful vegepygmies led by fungus queens.[3]
Command deck
Home to the commanders, who directed the Divinity's navigation and functions.[5]
Crew quarters
Home to numerous escaped aliens who subsist on the still-functioning food replicators.[3]
Divinity Core
The Divinity Drive and other power supplies were once housed here, but during the crash, the veil between planes weakened, trapping three groups of outsiders (divs, psychopomps, and proteans) in a state of cold war. 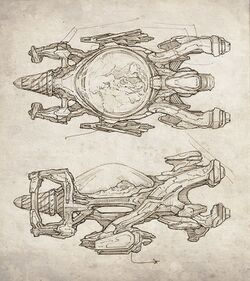 A habitat module from the spaceship Divinity.

Habitats
The Divinity had four habitat pods and 14 habitat domes, each serving a different purpose: providing air, food and water, recreation, or serving as zoos and gardens for alien life. During the crash, most of the domes detached, and the central pods were destroyed. Habitat Pod 1 was originally filled with Androffan jungles, but was damaged by the Dominion; after that, the crew harvested new specimens from Castrovel, including an entire lashunta village, and put them into stasis—one of their last acts before the crash, which somehow did not damage the pod, before the Technic League agent Geetan Prosser deactivated the stasis.[6] Habitat Pod 4 is an icy waste, filled with boreal creatures.[3]
Medical bay
Home to the undead crew who retreated here just before the crash.[3]
Primary engineering deck
A multi-level deck where all engineering was handled. Due to its altitude post-crash, it was colonised by spine dragons and their gargoyle servants.[3]
Quarantine
Prison of the first victims of the Dominion's weaponry.[3]
Recreation deck
A deck where the crew could relax as though back home on Androffa.[7]
Science labs
Numerous decks were dedicated to sciences, including anthropology (currently home to undead), biology (filled with evil fungi), physics (infested by traps and haywire robots), and robotics (ruled by a rogue Technic League member thought dead).[3]
Secondary engineering deck
A garage, repair facility, and secondary power source, home to the only shuttle that remains intact after the crash.[8]
Security decks
The Divinity maintained numerous security decks, the largest of which was called the security sector. The security sector served to keep law and order across the ship, and was also the hub of the Divinity's monorail network.[9] Its control centre, which came with its own life support, power supply, and food, can last months.[10]
Stasis lab
A high-security jail where Dominion prisoners were (and still are) kept.[3]

The Divinity spearheaded a caravan of several other ships.[11] As it crashed, these other ships separated with some attempting to land intact, resulting in the wide spread of wreckage across Numeria. These ships included:

The Divinity was launched from Androffa around nine millennia ago, on a mission to spread culture and civilisation to other planets that was scheduled to last 25 years. The Divinity's crew, though still human, viewed themselves as gods, and sought to foster an empire with their mission. During the first several years of the mission, the crew made contact with dozens of societies and brought some individuals aboard the ship.[1]

Eventually, out of hubris, the crew drove the Divinity into a region of space controlled by the Dominion of the Black, which crippled the ship. Although the Divinity was able to open a wormhole to escape into an uncharted solar system, the Dominion's weapons, which spread insanity among the crew and artificial intelligences alike, had done their work: soon enough, the crew descended into madness and started fighting each other as well as the increasingly unstable central AI. In the end, the still-sane crew decided to scuttle the Divinity on Golarion, the closest habitable world, where they could retreat before the AI could seize the life support systems.[1][2]

However, the crash was more devastating than the crew expected. In -4363 AR, the Divinity broke apart in Golarion's atmosphere, and nearly all of the crew died. The biggest piece crashed mostly intact in northern Numeria, becoming known as Silver Mount, while most others landed in the Felldales. Most of the crash sites were eventually buried by the local Kellids, who viewed them with fear after a warlord accidentally triggered an explosion, although Silver Mount proved too big to bury.[1]