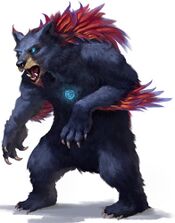 God callers are the predominant religious leaders of the native people of Sarkoris. A god caller is typically a summoner whose eidolon is revered as a god by the followers of that god caller. The eidolons summoned by god callers typically resemble animals native to the region, such as bears or wolves, with prominent unusual features such as feathers or wings. The beliefs, edicts, dispositions, and rituals of god callers and their followers all vary widely from group to group.[1]

With the closure of the Worldwound and the return of many Sarkorians to their native homeland, the tradition of god calling has seen a resurgence. Having returned to Sarkoris after long exiles in distant lands, god callers and their gods are even more diverse in appearance and customs than before.[1]

In some circles away from Sarkoris, the concept of god calling is denigrated as the worship of false gods. Evidence cited is the lack of divine power granted by the eidolon.[2]