The Order of the Rack is a Hellknight order founded in 4638 AR.† It was one of several new or re-established orders created in the aftermath of the disbanding of the various Hellknight orders previously charged with the defence of Cheliax's frontiers. It took over control of Citadel Rivad in 4639 AR, when the Order of the Scourge relocated to Citadel Demain.[1][2] 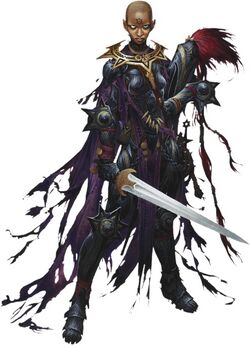 The Order of the Rack numbers among the Hellknight orders that the public most loathes. The order has a reputation for raiding the homes of those who speak out against the status quo, and for breaking up groups of malcontents before they become guilds, unions, or revolutionaries. They are the enemies of foreign ideals and innovations, not because they lack merit, but because they detract from what these Hellknights perceive to be the traditional values of southern Avistan. Art and technology are viewed as wasteful or dangerous, especially when they meet in union. None can say how many valuable printing presses Hellknights of the Rack have destroyed, or how many thousands of pages of unique stories, songs, and philosophies they have burned in the shadow of Citadel Rivad. All of this is summarized in the Order of the Rack's symbol, the torturer's wheel, which the order sees as the embodiment of wayward thinking and the suffering manifested by those permitted to indulge their ideas.[3]

The Order of the Rack inherited Daidian Ruel's endless quest to destroy wasteful knowledge and indolent idealism before it can affect the simplicity of everyday life. They usually do so via book burnings and the suppression of rebellious groups. They seek to avoid change through the elimination of any dissent and the control of information. Anyone and anything which would distract from the normal peaceful progression of existence, whether for good or ill, must be eliminated before it has a chance to infect and fester.[4] Dangerous philosophies are also a target of their purges, including anything that relates to the Common Rule as practiced in Andoran and paid lip-service to in Galt, to the more egalitarian philosophies of the ancient Azlanti.[5]

The government of Cheliax is highly interested in how it is viewed by others, and rewrites history not only to suit its interpretation of both current and past events, but also to exact revenge upon those who have fallen out of favor by literally writing them out of the official history book. Every three months a new version of the written history of Cheliax is produced by the imperial printing presses, and it is the sacred duty of the Order of the Rack to retrieve the outdated versions from all libraries, schools, and institutions, and burn them in so-called 'clarity pyres'.[6]

Lictor Richemar Alamansor commands Citadel Rivad and leads the Order, although there are persistent rumors that he is searching for his successor among the ranks of the order.[4] He holds public clarity pyres outside of Citadel Rivad on the second Oathday of every month.[5]

Recruits for the Order of the Rack frequently come from old established families that have suffered from the upheaval which accompanies change and have reason to believe in the inherent order and stability of tradition.[4]