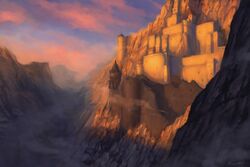 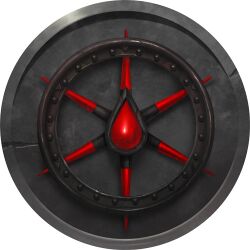 Symbol of the Order of the Rack

The oldest of the citadels of the Hellknights, Citadel Rivad squats in the Turanian Hills northwest of Westcrown, the Twilight City and former capital of Cheliax. It is a solemn jail to heretical scrolls, quartos, and banned lore, and is zealously guarded by the Order of the Rack.[1]

Rivad began as an outpost for Taldan traders. Sometime prior to 4580 AR the Order of the Scourge chose the outpost as the site for a Hellknight Citadel, and with Chelish subsidies of gold they completed Citadel Rivad at its present location in 4580 AR. The Citadel itself is an imposing structure: a storm-swept edifice built from black and gray granite, personifying the Hellknight philosophies of discipline, law, and mercilessness.[2]

In 4589 AR, the Citadel was nearly destroyed by a fire that began in its main library, located in Duskmoor Tower. This tragedy is clouded further by the fact that legendary Hellknight founder Daidian Ruel was seen that night fleeing the Citadel to the northwest, leaving behind the corpse of wizard Sheel Leroung's most valued apprentice. This was the last known sighting of Ruel.[2]

Citadel Rivad is built upon the foundation of the older Taldan Fort Rivad, and some claim that there are twisting passages and catacombs lying beneath the fortress.

Stranger still are stories of the keep's reconstructed Duskmoor Tower, the originating point of the 4589 AR fire. Eyewitnesses claim to have seen a door in the tower leading to an entire library of spectral books. The Order of the Rack has denied these claims as wild-eyed imaginings, precisely the sort of distracting and blasphemous content that the Order seeks to disabuse.[5]