Unicorns are intelligent and noble forest creatures who are fierce defenders of their woodland homes.[1]

A unicorn looks like a magnificent white horse with a goat-like beard and a long ivory horn protruding from its forehead. A typical specimen is eight feet long, five feet tall at the shoulder, and weighs 1,200 pounds.[1]

Unicorns are often solitary creatures, but a mated pair may be found together (they mate for life) and there have been reports of a "blessing" of up to six unicorns being encountered.

They are implacable foes of evil, and do not tolerate evil or destructive creatures in their territory. They prefer to associate only with good-aligned fey, good-aligned humanoid women, and animals. Their natural empathy helps them befriend the animals of their environment. Their associations are not limited to creatures of the wood, however, as they can ally with other good creatures in times of need. There are rare tales of solitary unicorns becoming the companions and protectors of exceptionally virtuous humanoid women. These relationships usually end if the woman commits to a lover or a child, giving rise to the myth that unicorns only associate with virgins.[1]

The true origins of the unicorn are unknown, although an ancient legend says that they jumped fully formed from the Tree of Stars, a magical place in the River Kingdoms' Stolen Lands.[2]

Unicorns are strong and hardy, able to physically overcome foes using their hooves and sharp horns. They prefer to charge their foes to take full advantage of their horns. The horn can harm creatures which are otherwise resistant to anything but magic weapons or good-aligned attacks. Their horns, sometimes called alicorns, also have magical properties that enable them to detect and protect themselves from evil, and also to heal creatures with its touch. Unicorn horns can be used as component in magical healing, and powdered unicorn horn attracts a good price from those who have no scruples over how it is obtained.[1] 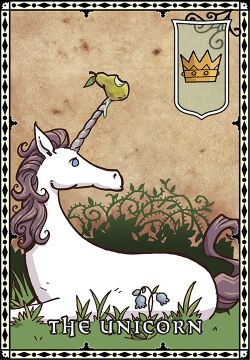 The Unicorn card from a Harrow deck.

The blighted Axan Wood in Geb is home to a unique race of twilight unicorns.[3] A unicorn might occasionally choose to serve a particularly pure female humanoid knight as a mount. This lasts as long as the knight remains as virtuous as her steed.[4] The largest herd of unicorns on Golarion is said to have made its home in a forest in northwestern Sarkoris. After the opening of the Worldwound in 4607 AR, nearly all of the woodland burnt to the ground, and its unicorn inhabitants died in the blaze or were later hunted and killed by demons. The place is now known as the Shroud of Unicorns.[5] The stuffed head of an otherwise unknown black unicorn is said to decorate the trophy room of Osirion's ruler, the Ruby Prince.[6]

Certain noble and virtuous magic-users are capable of summoning unicorns to help them in the battle against evil.[7]

Being creatures of popular mythology, many cultures use unicorns as symbols. A unicorn is one of the images found on a Varisian harrow deck used by harrowers throughout Golarion.[8] It can also be found as a card in the magical Harrow Deck of Many Things.[9]