Harpies are carnivorous creatures that resemble humans with wings and talons of various birds of prey. They can use their enchanting voices to lure victims to their doom.[1][2]

A harpy appears as an amalgam of feral human and bird, with feathered wings and a predatory bird's claws. Often, they also have feathers and down across the rest of their bodies, which differs depending on their environment, often tending to match local birds. A harpy's face looks almost human at first glance, but closer inspection reveals their carnivorous teeth and predatory eyes. Still, when well disguised or in poor light, a harpy can sometimes nearly pass for human. Harpies have light, lithe frames and are slight in build, necessary traits to stay aloft in flight even with their large wings.[3] Most are five feet tall and weigh about 90 pounds.[4]

Harpies can live in almost any environment other than extreme cold.[3] They are rarely seen north of Varisia[5] but favour marshlands and mountainous regions where they can lure more powerful prey into bogs or over cliffs.[3] Those who live near settlements make greater, if not fully effective, efforts to groom themselves.[4]

Harpies posses an innate talent for understanding the minds of others, and some scholars believe that harpies' captivating song utilises an advanced sense of empathy to ensnare the minds of their unfortunate victims. This empathy has become utterly twisted; harpies enjoy the "taste" of a sentient creature's fear and pain more than the animalistic panic of a dumb beast. Harpies' favourite meals are humans, elves, and—even though their taste leaves a lot to be desired—goblins, since the intensity of their manic fear is all but irresistible.[3][4] Harpies love to play with their food, and given the opportunity will torment a sentient meal for weeks or months.[6]

The origin of harpies is unknown. Some scholars of other races believe that harpies are related to the lamyros, or lamia-kin, but this has yet to be proven.[7] Harpies are believed to have originated in the distant and storied lands of Iblydos but have since spread across much of the Inner Sea region.[5]

Harpies are also renowned for their overpowering musk and can normally be smelt long before they are seen. Their droppings-encrusted aeries are particularly pungent.[3][4] 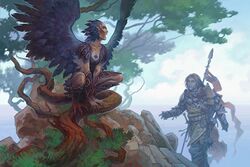 A harpy sings to Alain.

Harpies live in small family and tribal groups in guano-encrusted rookeries. However, due to their well-earned reputation as a flesh-hungry menace, harpy tribes near humanoid settlements normally restrain their hunting habitats to avoid retaliation and annihilation.[6][4] They can use simple weapons, and more rarely tools and more complex weapons. Bow-wielding harpies are particularly well-regarded and effective killers.[4]

Harpy babies are born already able to devour raw meat, and whilst normally raised by their parent, in the event they are orphaned, the tribe will raise the child.[6] Harpies can theoretically live into their sixties, but most meet violent ends long before that.[3]

Multiple groups of harpies sometimes join together into loud, squabbling rookeries. Such rookeries do not necessarily provide safety for its members, since harpies' violent tendencies still manifest even amongst their own kind. Harpies are social creatures within their kind, and a lone harpy is either an exile or on some sort of mission that requires them to travel alone.[6]

Harpy communities have a clearly established hierarchy dominated by the most cunning or physically strong harpy (or both), who maintains rule through intimidation and violence. Magic-using harpies, most commonly sorcerers or clerics dedicated to Pazuzu, often set themselves up as power-behind-the-throne figures who help their puppet leader cow the rest of the flock.[6]

The flock structure is brutal and chaotic, with the leader of a flock often toppled by a conspiracy of weaker members who turn on each other even when victorious with just as much hate and vigour as they had for their fallen mistress.[6]

Worship of the demon lord Pazuzu is a dominant feature of harpy life, and many rookeries boast an elaborate, yet portable, shrine dedicated to the King of the Wind Demons. Such shrines are often replete with offerings of severed tongues and plucked eyes.[6]

Harpies rarely separate from their family, but those who experience life outside of their culture often temper their feral ways and are more communicative with others.[4]

Relationships with other creatures

Even by the standards of other monstrous races, harpies are not particularly trustworthy and are quick to betray others when they think they can get away with it. They can be dominated by more powerful creatures,[6] for example, the white dragon Sjohvor leads a flock of cowed harpies in Iobaria.[8] Harpies sometimes form alliances with creatures that are not especially intelligent (and as a result never taste particularly good); examples include alliances with ettins and ogre tribes.[6]

Elephant-sized shantaks, which are much more powerful than harpies, possess an irrational fear of them.[9] 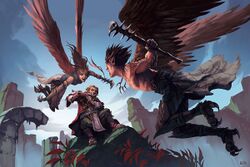 Lem gets into some trouble with harpies.

Harpies live across many of the wilder temperate mountain ranges of the Inner Sea region as long as the region itself is at least temperate.

They are relatively common in the unsettled wildernesses across Varisia, but they give the city of Korvosa a wide berth since Order of the Nail Hellknights who dwell there mercilessly hunt harpies. The Mushfens near Magnimar provide a much more suitable home. Many more rookeries also settle near and prey upon small communities dotted across the Varisian heartland.

Harpies across Varisia often make their homes in ancient Thassilonian ruins, with many nesting along the length of the Storval Rise.[5] Varisian alchemists have even developed a process to distill or synthesize harpy musk, which is used to scare goblins.[10]

In the eastern reaches of Avistan, harpies infest the ruined Qadiran city of Al-Bashir[11] and the once-sacred mountain of Aroden's Eye in Taldor.[12]

The deserts of Katapesh beyond the Pactmasters' influence are home to numerous harpy rookeries. These desert harpies often maintain several lairs that they move between, and are so prevalent that slave traders travelling through their territory will bedeck their least valuable slaves in gaudy fake jewellery with hopes that harpies will snatch only these most obvious targets.[5]

In the rest of Garund, harpy tribes can also often be found along the wilder reaches of the continent's western coastline.[5]

In the Shackles, the green-feathered Whetted Brood of harpies inhabits Shark Island.[13]

The Silent Maidens are a flock of harpies who roost in Skyborne Keep, the floating, magical castle commanded by the storm giant Lona Orames.[14]

The ancient harpy crone Nevaki rules over a large number of dire corbies in the Darklands chasm known as the Endless Gulf.[15]