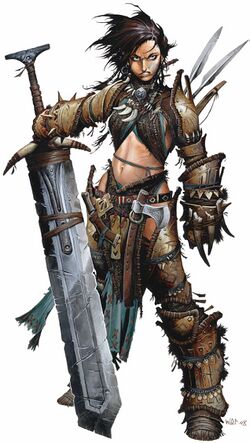 The original natives of most of Avistan before the spread of the Taldan Empire, the Kellids (pronounced KEHL-ids)[1] represent what every resident of the continent thinks of when they refer to "barbarians". Sandwiched between an empire of orcs, marauding demons of the Worldwound, and the witch-haunted kingdom of Irrisen, Kellids are a pragmatic product of their harsh environment and direct descendants of a more savage age. Kellids in northern Avistan cling tightly to their traditional ways, while those in southern countries like Druma and Isger have largely integrated into the local Taldan or Chelaxian culture.[citation needed]

The appearance of the Kellid people is sculpted by the landscape in which they have to survive. They are generally lean in physique, gaining and shedding fat with equal ease as they feast heartily and march their lives on their backs across hundreds of miles. Most have very dark hair and light brown skin with deep tans; their dark eye colors range from brown to green.[2][3][4]

Most Kellids bear scars from combat or their environment, and those who do not are often derided as weaklings given up to unbecomingly comfortable lives.[3]

Kellids tend to dress in primitive clothing made from leathers, furs, and hide. Their exact style of dress tends to change depending on the individual tribe and the local climate. One item of clothing unique to the Kellids is their zoic fetishes, small charms made out of bundles of twine hair and stone that are often enchanted with powerful druidic magic.[2]

"Kellid" is a broad category of related peoples tied together by a shared language and history.[5] The Kellid peoples include:

The Kellid people have inhabited the lands of the north for as long as anyone can remember. Despite this, their recorded history is limited by their lack of a written language. They once lived across most of Avistan, and their ancestors date back long before the Age of Destiny; while they remember much of their history through their oral tradition and require every member of a clan to memorize its history and legends, it can be hard to separate fact from myth and allegory.[2][4]

Although now mostly confined to northern Avistan, Kellids once lived farther south until they were displaced by other civilizations. One example of this were the Isgeri tribes (for whom the nation of Isger is named), who were defeated and driven off by the Taldans in 2133 AR.[6]

One part of Kellid history that is still fresh in the mind of many is the fall of the Kellid kingdom of Sarkoris. This nation was the first country to fall victim to the ever-expanding Worldwound. According to historical accounts, Sarkoris was a strange land of witchcraft and painted barbarians.[2][7] The loss of Sarkoris and deceptive hazards of their homelands contribute to their cultural wariness of outsiders and the unexplained.[8] 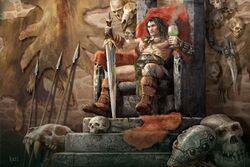 Kevoth-Kul, the Kellid Black Sovereign of Numeria, rules at the whim of the Technic League.

Kellids live in the brutally cold tundra and mountains of northern Avistan. While once common from Andoran and Nidal to the River Kingdoms, their reach is now mostly limited to the Realm of the Mammoth Lords, the Worldwound, and Numeria, with lost clans scattered across Brevoy and Ustalav. In Ustalav, the Kellids are insultingly called "leechfolk" by the Ustalavs.[9] They commonly inhabit a range from the Tusk Mountains to the Numerian plains.[3][10] 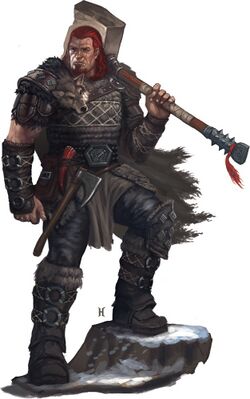 Kellid culture, like the Kellid people, is shaped by its harsh surroundings. It is a primitive tribal culture that values tribal loyalty. Few Kellids trust magic due to being beset by the magical threats of the Worldwound and the witches of Irrisen, or technology for the alien threats of Numeria and its Technic League.[2]

Kellids value strength, bravery, and cunning over the academics of the weaker southern peoples; while as capable of intelligence and insight, their situation allows little room for learning that does not aid in their struggle for survival.[2] Other cultures' concepts of scholarship, ownership, and government mean little to a Kellid clan,[4] and when among a group of foreigners, Kellids show little patience for compromise, carelessness, and weak leadership.[10] They prepare for danger to strike at any time and prefer to always be armed.[8]

Kellid clans are nomadic, and each clan member carries only what they and the clan need to survive. Those who set up even temporary homes do little to furnish them with the essentials for survival and emergencies, and always prepare to abandon it without hesitation.[8]

The language of the Kellids, Hallit, is a coarse language with no written form.[2] 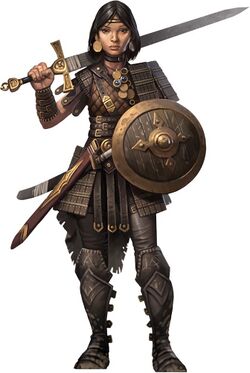 Kagur, a Kellid woman of the Blacklion tribe in the Realm of the Mammoth Lords.

Clans battle over resources and prestige; even among Kellids, a clan makes and keeps few friends. Clan members keep to their own.[10]

Few outsiders can gain a Kellid clan's respect, though those who do through honesty and strength are as welcomed as family. A handful of Kellid strongholds welcome outsiders, including Hillcross, where giant-tamers adopt frost giant orphans into their clans. Likewise, outsider settlements like Icestair can establish friendships with nearby clans.

Of other races and ethnicities, Kellids most respect Ulfen and dwarves for their similar traits.[10]

Kellids view most gods introduced by contact with southerners as indistinguishable from nature, and often see arcane and divine magic, forces of nature, coincidence, and the fundamental acts of survival as equally valid expressions of spirits that live in all things. As such, many Kellids are druids who follow tenets similar to the Green Faith.[11] Kellids believe the world is governed by invisible spirits that they must please to maintain balance with their harsh homes. This extends to compassionate displays, even to enemies, when faced with great natural adversity as they consider ill-mannered acts in a spirit's presence as a reliable way to upset it.[8]

The precursor nation of Sarkoris also believed each clan was protected by a patron spirit that the most attuned among them could call into physical form, a tradition that modern Kellid summoners maintain.[8]

Of the imported southern gods, Kellids most respect Gorum and Desna, though the Kellid interpretations of these gods often puts them in conflict with other races. In particular, Kellid insistence that Gorum is one of their kind rather than an orc or half-orc leads to further conflict with those races. They also see Desna not as an elf but as a Kellid woman riding an elk who shows them the way to herds of game.[3][11]

Some Kellids also follow Erastil, while those who see violence as an answer to the problems of the Worldwound and Numeria venerate Rovagug. Power-hungry Kellids near the Worldwound might even turn to Deskari in exchange for power.[8] In the Realm of the Mammoth Lords, some Kellids worship the giant god Minderhal.[2][3]

Kellid names are as brusque and percussive as their Hallit language, and most use two or fewer syllables. Second names are rare and typically limited to those who distinguish themselves or draw from an especially significant lineage,[3] though Kellid clan members hold their clan's name in even higher regard than their own.[4]