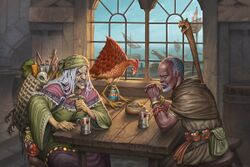 Old-Mage Jatembe was a great wizard and folk-hero to the people of the Mwangi Expanse. Through his deeds and magical teaching, Jatembe brought the people of Garund out of the barbarism of the Age of Anguish and on the path back to civilization. His followers continued spreading this knowledge long after he was gone, greatly influencing the magical traditions of countless cultures throughout Garund and Avistan.[1][2]

Even though much of the life of Old-Mage Jatembe is now considered myth, there are a few facts that have survived the passage of time. During the Age of Anguish, Garund was a place of violence and barbarism. Jatembe was the first human to rekindle the art of wizardry, of written magic, after the fall of Azlant, in an effort to help bring civilization back to his people. He is said to have regained this lost knowledge from many sources, including his dealings with angels, demons, and other inhabitants of the Great Beyond. Some claim that he stole his knowledge from the severed head of Ydersius, the god of the serpentfolk, after which he sewed its mouth shut.[1]

In -3504 AR, Jatembe gathered a group of followers who became known as the Ten Magic Warriors.[3] To show their dedication, the warriors obscured their identities behind golden animal masks. Together, Jatembe and the Ten Magic Warriors explored the ruins of the ancient pre-Earthfall cities of Garund, uncovering many forgotten magical secrets.[1]

In -3502 AR, after reclaiming the lost art of magic during the last years of the Age of Anguish,, Jatembe founded a center of magical learning known as the Magaambya in the town of Nantambu in the Mwangi Expanse.[3] Amazingly, the Magaambya still exists today and continues Jatembe's legacy of preserving and passing on magical and cultural knowledge to those who will use it for the betterment of others, while respecting the power of diplomacy.[4][1][5]

Even in the first tales told about him, Jatembe is already depicted as an old man, leading some to speculate that he was one of the immortal masters of the lost city of Ird. Others dismiss this claim, since Jatembe and the Ten Magic Warriors are known to have destroyed those debased and cruel masters as punishment for their wickedness.[1] Repeating the former theory in the Magaambya is not recommended, as any association of Jatembe with Ird is seen as being incredibly disrespectful.[6] There is some speculation that Jatembe learned from the druidic traditions, or was a druid himself before turning to wizardry. This is supported by the fact that the Magaambya still teaches druid spells to this day. Still others claim that he gained his mythic powers from ancient artifacts, and that he left this world after the power within them faded.[1]

Jatembe himself, however, vanished from history, and there are no known tombs for him or his Ten Magic Warriors. Some claim that he was carried off by a great spell, others that he left Golarion in order to repay his debt to the beings that had granted him mythical power. Still others claim that Jatembe was actually the mortal incarnation of the god Nethys, but no one has ever discovered the definitive truth. Before departing, Jatembe ordered the Ten Magic Warriors to remain behind and became advisors and protectors (but never kings) of the people; their images are still represented in mosaic on the ten towers of the Magaambya.[7]

Jatembe is the creator of the major artifact called the Ring of Nine Facets, which he passed on to the Ten Magic Warriors so that they might protect their people after he left.[8] The Watcher's Stone of Jatembe, a magical scrying device believed to have been used by Jatembe itself, still lies in Nantambu.[7] Legends also tell of the Utunzaji Hekima, a set of 111 magical scrolls penned by Jatembe that are filled with spells, insights, research, and transcripts of his conversations with various outsiders. While a few of them can be found at the Magaambya, most have been lost to time. One of them, called Usafi, was recently recovered from a demon-infested ruin in the Mwangi Jungle.[9] Being a prolific writer, Jatembe is also believed to have penned, or at least compiled, the spellbook called the Book of the Serpent's Path, most likely the result of his research with the Skull of Ydersius.[10] The only magical item Jatembe took with him was the beacon of true faith, given to him by one of his patrons.[1]

Jatembe left behind his spellbooks for his students at the Magaambya. These were collated, collected, and annotated over the following millennia, eventually becoming known as the Wisdom of Jatembe. They exist in countless volumes, and each contains not only the spells he created and cast, but also the ancient mage's teachings and wisdom, many of which deal with the similarities between arcane and divine magic. The spells celestial healing, cyclic reincarnation, Jatembe's ire, mask from divination, and planar inquiry are associated with Jatembe and the Magaambya in particular. They reflect the philosophy of Old-Man Jatembe, and most Garundi spellcasters immediately recognize their provenance and might become offended if used in a manner that goes against Jatembe's teachings.[11]

Among the Zenj people of the Mwangi Expanse, Old-Mage Jatembe is a significant, founding cultural figure, analogous to Aroden among the inhabitants of Absalom, or the first pharaoh Azghaad among the Osirians.[7] Jatembe's learning continued through his followers at the Magaambya, eventually spreading throughout Garund and inspiring the aeromancers and flying cities of the Shory Empire a thousand years later,[1][4] as well as the artificers of the Jistka Imperium.[12]

The influence of Old-Mage Jatembe and his Ten Magic Warriors can be seen in a number of spellcasting and martial traditions that continue to this day. These include the Magaambyan arcanists,[13] the mystical Nameless One tradition,[14] the enlightened bloodrager, the Magaambyan initiate tradition among arcanists,[15] the magic warrior archetype among magi,[16] and the agathiel tradition among vigilantes,[17] and the spear dancing style, thought to have been the favored fighting style of one of the Ten Magic Warriors.[18]

Among the people of the Mwangi Expanse, 13th Desnus is celebrated as Old-Mage Day, a holiday in honor of Jatembe and the Ten Magic Warriors.[19]