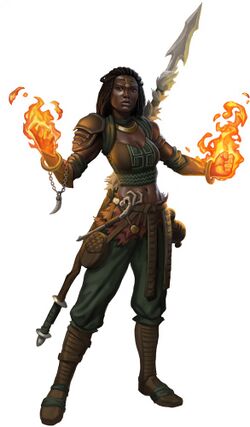 For other meanings of "Mwangi", please see Mwangi (disambiguation).

The name Mwangi (pronounced MWAN-gi)[1] often refers to the group of related, but ultimately distinct, ethnicities of humans who inhabit Garund's western coasts, the jungles and plains of interiors, and the southern reaches of the continent. In the Inner Sea region they most commonly live in the Mwangi Expanse, Rahadoum, Vidrian,[2] the Shackles, the Sodden Lands, and Thuvia.[3]

The appearance of the Mwangi people varies according to their subgroup: the Zenj, Bonuwat, Mauxi, and Bekyar. Members of all four subgroups commonly share physical traits, such as dark skin varying in tone from dusky through grey to coal black, and black hair worn in a variety of styles. As the Mwangi peoples are comprised of several distinct cultures, there is no single Mwangi style of clothing.[4] 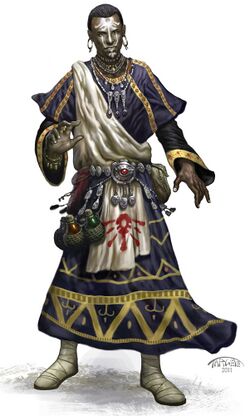 All the various tribes of the Mwangi are descendants of what must have once been a vast empire located in central Garund. Huge ruins of ancient fortresses and temples still dot the forested interior of the Mwangi Expanse, and the hills of the Shattered Range.[3] Little is known of this ancient kingdom, and the modern Mwangi avoid these ancient ruins, as they feel some strange pull from them. The Bekyar people in particular are known for their fear of these ancient sites. The oldest of these ruins is the city of Mzali, where a mummified king of this ancient civilization, Walkena, has returned to life and wants to reclaim the lost empire's former glory.[4] Other scholars speculate that the Mwangi descended from related Garundi wanderers, but such claims have yet to be substantiated.[5]

The Mwangi peoples have only recently begun traveling or emigrating from their home continent, and were largely unknown in the rest of the Inner Sea region until then.[3] 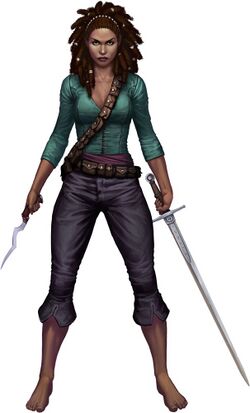 There is no single, united Mwangi culture. Each of the four main ethnic groups (see below) has its own set of beliefs and traditions. Most prefer inter-linked tribal structures, though the Mauxi people of Thuvia do not. Opinions are divided as to whether the Caldaru and Lergeni are related to any of the other groups, are separate sub-groups in their own right, or not actually part of the Mwangi peoples at all.[citation needed] Non-Garundi people often have trouble telling the four main ethnic groups apart, as the Mwangi have only recently begun venturing beyond their homelands. Each of the ethnic groups has its own religious traditions; Mwangi who have been raised outside of Garund generally follow the local gods of their adopted homeland.[3]

Least known of the four major subgroups, the Bekyar live in southern Garund, from Desolation Cape to Sargava, and are prominent slavers and traders. Bekyar are extremely tall, many reaching seven feet in height. Their skin varies in color from dark brown to black, and they wear their wiry hair long, often in elaborate styles.[4] They are known to be demon worshipers, primarily following Angazhan, Dagon, and Zura.[6] Bekyar tribes include the Bandu of the Bandu Hills, the Yemba, and the Rostoun of the Little Vanji River.[citation needed][7] Bekyar names often include numerous sibilants followed by a hard consonant. Examples include Sinkitah and Soki for women and Seckor and Yekskya for men.[3]

People of the Bonuwat have distinctively colored eyes among Mwangi groups.

The Bonuwat are seafarers, and as such are often the group most encountered by the outside world. The Mwangi found in ports such as Bloodcove or the Shackles tend to be Bonuwat. They are excellent fishermen and sailors. They worship a janiform version of Gozreh and Desna which they call Shimye-Magalla. Bonuwat are of average height, with wide mouths and swarthy or dusky skin, and are thought to have intermarried with an unknown trading culture in the distant past. Their hair is often straight, and they favor colorful, exotic clothing such as vests and baggy pantaloons. Bonuwat names include many that they have adopted from other cultures through trade. Their extensive trade routes along the western coast of Garund were developed long before peoples from other parts of the Inner Sea region began arriving.[3] Bonuwat tribes include the Ijo[8][9] and the Ombo.[10] Bonuwat names are often taken from other cultures with whom they frequently trade, and include Marisan or Shimshem for women and Banipani and Teruawa for men.[3]

The Mauxi are native to Rahadoum and Thuvia and speak Osiriani as well as Polyglot. The ruling caste of Thuvia includes some Mauxi. They tend to be more withdrawn and taciturn; most deny any connection to the other Mwangi groups, but some of the younger Mauxi hearken back to their tribal ancestry and copy the dress of other Mwangi groups. Mauxi are tall, with straight hair and ashen skin. Mauxi names are often taken from other cultures with whom they frequently trade, and include Butandra or Kalizama for women and Baolo and Pateba for men.[3] 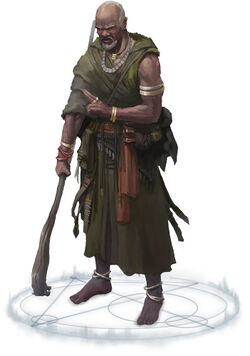 The Zenj are believed to be the most common of the Mwangi ethnicities, living in hundreds of small tribes in the jungles and savannas of the Mwangi Expanse. Some of the tribes live in villages alongside the region's many rivers, while others are nomadic herders who graze their cattle or goats in the Expanse's grasslands and hills. Jungle tribes tend to be patriarchal, while savanna tribes lean toward matriarchy. The two types are on friendly terms but avoid intermarriage. The Zenj are below average height, with slender, muscular frames and wiry black hair. Their simple clothing is made from animal hides or plant fibers. Many Zenj follow an ancient tradition of shamanism. Zenj tribes include the Kalabuta, the Mulaa, the plains-dwelling Bas'o, and the jungle-dwelling Ara and Ngali.[11] Among the Zenj, a long throwing club called an iwisa is used as a symbol of authority as well as a weapon.[12] Zenj names sometimes contain complex consonants, glottal stops and clicks that are hard to transliterate (the click sound here is represented by a "!"). Examples of Zenj names include Mpaadi and Xabala for women and !Kunat and Kpu'unde for men.[3]