The Church of Razmir is the cult surrounding the self-proclaimed god Razmir. Its members enforce Razmir's proclamations over the people of his theocracy, Razmiran.[1][2] It is the only legal religion in Razmiran; all other faiths are outlawed.[3]

Because Razmir is not a true god, his priests cannot cast true divine spells, instead using arcane magic to mask their deficiency. Healing, normally a staple of all clerics, is a particular problem for Razmiran priests, who use obscure arcane magic, folk remedies, and so-called "holy" artifacts to cure. These priests are quite convincing, and are able to dupe most commoners who see them perform their magic.[4]

Recently rumors have begun to circulate among the upper echelons of the clergy of Razmir that the Living God has been acting erratically and become withdrawn from his priests. The dangerous situation with Tar-Baphon across Lake Encarthan (see Foreign relations of Razmiran) has made some of this most devout followers begin to doubt whether they can really count on the protection of their god against the dangers of this time.[5] 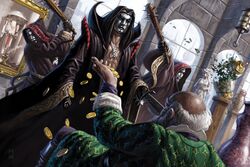 A man tithes Razmir as cultists destroy his property.

Razmir's faithful are strictly ordered by their loyalty to Razmir, and by what they have been able to accomplish in his name. These orders are referred to as Steps, and correspond to the number of steps one is allowed to climb in a temple to approach the mask symbol of the Living God. Each congregant is given a robe and mask that denotes his or her Step, which are delineated as follows:[6]

Steps generally achieve promotion not through acts of faith, but by seizing new territory and worshipers for Razmir. When trying to expand the faith into new regions, temples are always built in the poorest neighborhoods first. The clergy then begins working for the poor and sick and handing out alms to attract followers. Clergy then use the growing flock of faithful to help influence local government while extorting money from local businesses to "protect" them from their mobs. Once a new church has achieved sufficient clout, it then begins installing members of the faith into local positions of power.[6]

Religion plays a large, often detrimental part in every aspect of Razmiri citizens' lives. The priests of Razmir watch over all parts of society, and even the poorest laborer has a portion of his meager income taken by the priests in what is called the Tithing Step. While everyone else is forced to pay extortionate taxes, the priests of Razmir live lives of luxury and comfort. This lifestyle leads many of Razmiran's people to aspire to join the priesthood—regardless of their religious beliefs or their doubts about Razmir's divinity—as it seems to be the easiest path to wealth. Every year, hundreds of doubters are sent to the heart of the Exalted Wood to be indoctrinated into Razmir's faith. Those who return come back changed; they seem to lose their niggling doubts and return with a new-found faith, and many return with unexplained burns and scars. Some never return at all. Whispers of the foul rituals that may take place in the depths of the Exalted Woods spread rumors of magic that can bend people's minds or warp their souls.[1][2]

The faith of Razmir is relatively simple. It preaches that life is about the acquisition of gold and power. Those who follow the teachings of the Living God may enjoy life's luxuries while blasphemers and heretics deserve only to toil for the faithful. The faith preaches its superiority to all other faiths, other gods being regarded as lesser and irrelevant, and outsiders need to be converted to the fold, by force if necessary. The many individual tenants and rules of the clergy tend to be vague and open to interpretation. Punishments for breaking rules also vary, depending on the whim of the superior priest at the time. Indeed, many of the rules are intentionally contradictory in order to allow more experienced clerics to punish acolytes and thus imbue fear and obedience into the offending individual.[7]

The bodies of the dead have long been considered unclean and taboo, and the recently deceased are generally taken to be disposed of in communal mausoleums. This has recently begun to benefit the government in its relations with the newest regional power: the Gravelands under the command of Tar-Baphon. In exchange for mutual non-interference, the Razmiri government is believed to be handing over corpses to feed the Whispering Tyrant's undead legions.[5]

Razmir's temples are located in every village and market square throughout Razmiran, but also have spread into several nearby River Kingdoms, Molthune, Nirmathas, and Ustalav. The governments of Druma, Kyonin, and Lastwall have banned his worship and forbid his clergy from proselytizing. Most temples are quite simple affairs with a large central worship chamber arranged around a set of steps that lead up to a gold or silver mask.[6]