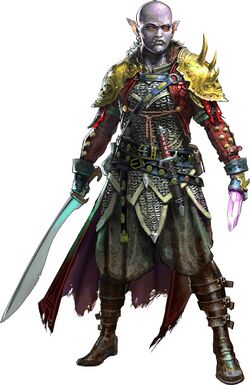 The Ironfang Legion is a former mercenary legion that fought on behalf of the Molthuni Army, then called the Ironfangs. Founded and led by Azaersi, a survivor of the Goblinblood Wars, the Legion no longer fights for money, but rather is working to conquer southern Nirmathas[1] in order to form a hobgoblin nation in Avistan, much like Kaoling in Tian Xia. Alchemists are celebrated in the Ironfang Legion unlike other arcane magic users.[2] Alchemists also serve as the Legion's main form of healing.[3] The Ironfang Legion employs beastmasters who train wolves, bears, boars, giant frogs, insects, and worgs.[4]

The Legion was founded by Azaersi in the Shrikewood. When her group, mostly veterans of the Goblinblood Wars or hobgoblin orphans of the same, defeated a Molthuni Army regiment, the General Lords approached Azaersi and hired the group to pillage Nirmathas, though the Legion acted without official sanction from Molthune. The Ironfang Legion gained notoriety after they massacred Fort Ramgate, and shortly thereafter, they fell off the map. Secretly, the Ironfang Legion stole the artifact, the Onyx Key, to help them deploy troops quickly on hit-and-run missions.[5]

Aligning with the strict organization of hobgoblin societies, the Ironfang Legion has a rigid structure composed of six ranks:

General
Azaersi is the founder and commander-in-chief of the Ironfang Legion.[1]
Commanders
The Ironfang Legion has four commanders who are directly below Azaersi in power. They are the commander of the army, Kraelos; the coordinator for specialist missions, Taurgreth; the religious leader, Azlowe; and Azaersi's personal and magical advisor, Zanathura.[1]
Lieutenants
Given wide discretion, lieutenants lead large groups of soldiers to carry out specific strategic goals.[1]
Specialists
Somewhat outside the standard hierarchy, the specialists might report to a lieutenant, a commander, or even General Azaersi herself, depending on the scope of their mission.[1]
Sergeants
These lead small groups of soldiers to achieve discrete and concrete tactical goals.[1]
Troopers
The backbone of the army, troopers are usually hobgoblins, though there are bugbears, worgs, and kobolds among others in the troops.[1]

Paizo published a major article about the Ironfang Legion in Trail of the Hunted 72ff.