This page contains spoilers for the following products: Souls for Smuggler's Shiv. 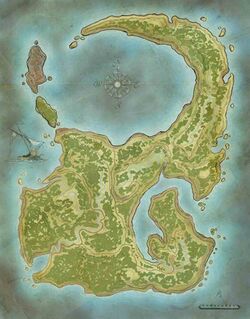 A map of Smuggler's Shiv.

Smuggler's Shiv[1] is a small island in Desperation Bay, off the coast of Sargava. It is infamous for its reefs and dangerous currents, which have wrecked numerous ships—some of them getting too close because they were seeking to avoid the attentions of the Sargavan navy based in nearby Eleder. The island is believed to be inhabited by cannibals and ghosts, and maybe even worse creatures—passing ships sometimes report sighting strange glowing forms on the shore.[2] Because of its fearsome reputation, Smuggler's Shiv is a popular place for pirates to bury their treasure.[3] The island gets its name from the knife-like shape of its coastline and the habit of destroying the ships of smugglers trying to avoid the Sargavan navy.[4]

Smuggler's Shiv is a small island of the coast of the Sargavan capital of Eleder. It is approximately 14 miles from north to south, 10 miles east to west, with a large, salt-water lagoon in the northern half. It is heavily forested and dotted with numerous small streams, providing plenty of fresh water.[5]

A large patch of viper nettles, a rare and spiky tropical plant whose red berries are known to have strong antiemetic qualities, can be found on the island's northern peninsula.[6]

A small lighthouse was built on the island's southwestern shore by the Chelish settlers of Sargava when they first started colonizing the region. It was erected to warn sailors off from the island's dangerous reefs and shoals, and was supposed to be the first building of a larger colony. This project was abandoned due to rumors of ghosts, curses, and cannibalism.[4]

The island's reputation for being haunted is well-deserved, as hundreds of sailors have found their deaths there. Their phantasmal presences can be seen at night thrashing about in the surf or beckoning to the living to join them below the waves. Their unnatural appearance is enhanced by the presence of the green, bioluminescent plankton that is commonly seen at night.[4]

The shoals around Smuggler's Shiv are littered with the wrecks of countless ships. Most have broken apart or are far underwater, but a few are near enough to shore to be identified. They include the Tattooed Lady, Tears of Grog, Golden Bow, Bloody Doll, Brine Demon, Scallywag, Nightvoice, Windwar, Bearded Harpy, Scarred Maiden, Crimson Angel, Volar's Lash, Wavereaper, Crow's Tooth, Bloodwalker, Alma's Ruin, Redwake, and the Thrune's Fang.[7]