Tsukiyo is the Tian-Min deity of the moon, jade, and spirits. He is the brother of the evil Fumeiyoshi and is the paramour of Shizuru.[1][2] 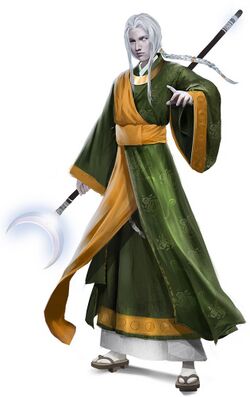 A depiction of Tsukiyo.

Tsukiyo and Shizuru, the Empress of Heaven, are lovers; Tsukiyo is also the brother of Fumeiyoshi. Aeons ago, Fumeiyoshi grew jealous of his brother's loving relationship with Shizuru and, on one occasion, grew so angry he murdered Tsukiyo. A legend holds that the very first stones of jade were formed at this time from the intermingling of Shizuru's tears with Tsukiyo's blood; jade is sacred within the church of the Prince of the Moon[2] and his holy symbol is a crescent moon made of the stone. Shizuru then successfully requested the aid of Qi Zhong, the god of medicine, to resurrect her lover. She then recruited Yaezhing, the punisher of the gods and the enforcer of divine justice, to punish Fumeiyoshi by banishing him to his brother's tomb and stripping him of his position. She stated Fumeiyoshi would forever envy his betters as the undead envy the living and, indeed, Fumeiyoshi is now styled the Lord of Envy and in his portfolio are dishonour, envy, graves, and the undead. In contrast, after his rebirth, Tsukiyo added spirits to his portfolio and became the patron of the samsaran race who are associated with reincarnation.[3]

Shizuru's relationship with the Prince of the Moon is not an easy one, however, as they never meet one another, in a symbolic representation of the separation of night and day, save for the times of a solar eclipse; those rare times are, of course, fleetingly fast.[2][3] They are known to have had at least one offspring, the star archon known as the Dusk Ronin. Although Dusk Ronin has not strayed from her original moral teachings, she has been banished from her parents' domain in Heaven due to an unknown occurrence, and now seeks to atone for her transgression.[4]

The holy symbol of Tsukiyo is a jade crescent moon. As with all the pantheon of Tian Xia, Tsukiyo is associated with a sacred animal; in his case, he adopts the hare.[1]

Relationships with other deities

As stated above, Tsukiyo is the lover of Shizuru and an enemy of his brother, Fumeiyoshi, who murdered him. One presumes he has good relations with Qi Zhong who resurrected him.[1][5] It is unclear what Tsukiyo's relationship is today with the evil rat goddess, Lao Shu Po, but it is likely not to be close or friendly: while Tsukiyo lay dead in his grave, Lao Shu Po crept in as a mere rat and feasted on his corpse. With this divine meal, she gained some of Tsukiyo's power and ascended to the status of goddess. When Fumeiyoshi was banished for killing his brother, she stole his portfolio of night and took it as her own.[6]

Tsukiyo appears as a human man of Tian-Min descent.[1] 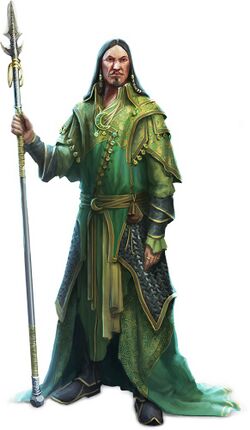 A cleric of Tsukiyo

On Golarion, Tsukiyo's worship is most significant on the continent of Tian Xia where he is classed as one of their twenty major gods. His faith is particularly strong in Goka (where there are impressive statues of Shizuru and Tsukiyo, some 250 feet tall, guarding the entrance to Xu Hong Bay[7]), Jinin, Minkai, Nagajor, Tianjing, Wall of Heaven, and Zi Ha.[1] The ruler of Zi Ha is Gyaltho Tulku, a very powerful cleric of Tsukiyo.[8] The Prince of the Moon is also a popular god in the Forest of Spirits where scattered shrines dedicated to him are found.[1][2]

In Minkai, the links are particularly strong: firstly through Tsukiyo's close relationship with the patron goddess of Minkai, Shizuru. Secondly, it is believed that Tsukiyo created the emblematic Jade Throne on which the emperors of Minkai have ruled for over a thousand years.[9] Thirdly, in the capital of Minkai, Kasai, stands the Tree of Souls: a huge cherry tree considered to be the soul of the empire of Minkai. This tree is tended by priestesses of Tsukiyo and all the earth around the tree is classed as sacred. Currently, the priestesses are aiding the druid Osuzu to determine how the now damaged tree can be healed.[10]

Aims of the church

Tsukiyo's worshippers perform the service of brokers between the living and the spirit world. As part of this work they may tend to cemeteries, defend villages from evil spirits, or ensure the common people conquer their fears of the dark.[11]

In both the faith of Shizuru and that of Tsukiyo, the times of a solar eclipse are very sacred, as their worshippers understand this is the short time when these lovers are able to reunite.[5] The links between these two faiths are further reinforced in larger temples to Shizuru by the existence of a shrine to Tsukiyo attached to these temples.[1]

Paizo published a major article about Tsukiyo in Faiths of Golarion.