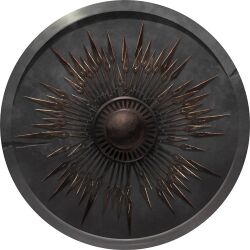 Citadel Vraid is the fortress-headquarters of the Hellknight Order of the Nail constructed by the city of Korvosa in an effort to successfully entice the Order to move to Varisia. It is located about 50 miles southwest of Korvosa on a narrow plateau named after one of Korvosa's founders, Montlarion Jeggare, and sits on the edge of the southern Mindspin Mountains.[1]

Rising from the peaks of the Mindspin Mountains, Citadel Vraid overlooks Conqueror's Bay to the north and the city of Korvosa farther east. It consists of three distinct structures connected by walkways that bridge treacherous chasms. The three castles are the Bastion Dominus (on its western side), Bastion Tyrannous (in the middle), and Bastion Ferox (on its eastern flank), and respectively represent the three ideals of Asmodeus: slavery, tyranny and pride.[2] These huge gothic structures dominate the entire area and serve to intimidate those who would oppose the rule of law.[3][4][2][5] The fortress owes much of its defensiveness to the ruggedness of the Mindspin Mountains. Even so, the elaborate demonic faces leering down from its ramparts in addition to the numerous steel-shod towers protruding upwards like pikes from the citadel's heart also help to deter attacks.[6]

The citadel houses nearly 400 occupants. 300 armigers and common Hellknights serve under the command of some 40 veterans, signifers, and other officers who in turn answer to high-ranking Hellknight paralictors: the Mistress of the Blades Maidrayne Vox, Paravicar Acillmar, and Lictor DiViri. The Hellknights live in the barracks, while the remaining occupants (slaves, prisoners and servants) live in the slave-trenches around and beneath the citadel.[2]

In 4682 AR, Queen Domina Arabasti of Korvosa wanted to secure her position by getting the support of a Hellknight Order. She offered to fund the construction of a great fortress for any order that would relocate to Varisia. The Order of the Nail's lictor, Voltarios the Scourge, accepted Domina's offer, but insisted on complete control over the design and construction of the castle. He then assigned his most trusted paralictor, Saem-Kyrs, to manage the project. At first, under Saem-Kyrs's draconian leadership the project was executed without delays but as Saem-Kyrs was spending increasingly longer hours in the foundations of the growing fortress, he grew gradually more and more paranoid. The project started to fall behind schedule and the paralictor began to ignore his superiors and finally he tried to seize the castle with a loyal force of Hellknights, attempting to create a Hellknights' kingdom. Lictor Voltarios anticipated the coup, if not secretly encouraged it, and on the evening Saem-Kyrs declared his move, Voltarios' assassins slew him along with several dozen renegade Hellknights. After the incident, Voltarios burned all records of Saem-Kyrs, as well as the floor plans of the castle, blaming the destruction on the insurgents and ensuring Citadel Vraid's floor plans remained a secret.[7]

After the elimination of Saem-Kyrs, the final phase of the construction was undertaken by Voltarios himself. The work was plagued by serious accidents and delays. Rumors spread that the construction was corrupted by rune magic from the remnants of a long-buried Thassilonian temple that was found during the construction. Meanwhile, Voltarios grew increasingly paranoid, orchestrating continuous investigations about supposed rebellions which threatened to tear the Order of the Nail apart. It took almost three more years to complete to citadel. In 4685 AR, on the eve of the citadel's inaugural ceremony, tremendous bolts of storm-borne lightning struck the citadel's metal-clad spires, shaking Citadel Vraid's very foundations. The armigers on the walls reported strange crackles of energy flickering up the citadel. The next morning Voltarios's burnt corpse was found skewered upon the spire of Lictor's Keep. After his death, the order appointed Severs "Boneclaw" DiViri as the new lictor.[7][6]

Despite the presence of the stalwart Hellknights, Citadel Vraid has long troubled the Order. Reports and rumours tell of strange veins of emerald tracing the fortress's walls during violent storms and, even more disturbingly, a record of murders within the seemingly impregnable inner chambers. Although the cause of these happenings is yet to be officially determined, the leadership of the Hellknights fears the emergence of dark powers from forgotten Thassilon, for the foundations of the citadel were constructed from the monolithic stones of displaced ruins that once lay among the foothills of the Mindspin Mountains.[6] The situation has reached the point where even the Hellknight Lictor has begun to weigh the benefits of remaining in the haunted citadel and abandoning the region entirely for familiar Cheliax.[6]

Paizo published a significant article about Citadel Vraid in Castles of the Inner Sea.