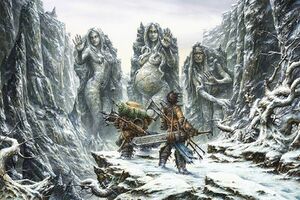 The triple goddess monument at Artrosa

The Dvezda Marches are a frozen stretch of grassy steppes and untouched wilds that form the northeastern quarter of Iobaria. This unclaimed region is known by many names including the Wilds, the Witchwilds, the Plague Lands, and its old cyclopean name of Old Koloran. The region's current name comes from the Dvezda centaurs who claimed the marches as their territory and united the region's centaur clans before being wiped out by one of the region's many plagues.[1]

The Marches receive little rainfall, with the Myrfrus River forming the only major body of water in the region. Aside from small streams and ponds, the rest of the region is dry and rocky, making farming nearly impossible. To the north, the soil freezes solid, becoming permafrost. Much of the remaining land is covered with fields of low-yeild grasses and thorny shrubs.

The northern regions of the Marches are choked in winter-like conditions for most of the year, but the southern reaches are warm enough to allow for a four-month growing season.

Abandoned farmsteads and ghost towns are the only signs of human civilization in much of the steppes. Crumbled and moss-covered cyclopean ruins, forming stone cities, ancient bridges, towering fortresses can be found throughout the Marches, but these enormous ruins are usually inhabited by monsters, bandits, or accursed undead. Great migrating herds of aurochs, caribou, deer, and wild horses, left behind by human settlers, inhabit much of the land.

Major geographic regions of the steppes include the Hoofwood forest, the Deeprun Crevasse, and the Eastern Ice Steppes, while the largest settlement is the centaur town of Vurnirn.[2] The nearest human settlement to the Marches is the port city of Mirnbay, 200 miles to the south, where the Myrfrus River empties into the Castrovin Sea.[1]

The Dvezda Marches were first inhabited by the cyclopes of Koloran, but their empire fractured and collapsed into chaos in part because of devastating plagues.

Centuries after Koloran, human settlers from Iobaria attempted to tame the land, but plagues eventually drove many of them away. From time to time humans attempt to reclaim their old settlements, but all attempts fail in dark and troubling ways.

Centaurs form the majority of the Dvezda Marches' inhabitants, and are divided into dozens of clans of several ethnicities. The Dvezda centaurs once ruled the Marches before being wiped out by a plague. The Rashalka centaurs, considered the most civilized, inhabit the Hoofwood and the surrounding lands. The stocky Azorva centaurs live in the western mountains, and the thick-furred Tsolniva centaurs inhabit the Eastern Ice Steppes.

Ruins of human and cyclopean settlements can be found, but the only humans encountered are usually treasure hunters, explorers, or bandits. Some Iobarian humans did not join in the mass exodus when the plagues struck, and their nomadic descendants continue to wander the eastern steppes in communities of fewer than 100 souls. These nomads, called plague folk by outsiders, refuse to settle in one place, and consider gathering in large groups a taboo for fear of catching a plague, instead following herd animals in their large, animal-skin tents, scrounging resources from the barren lands, and, on occasion, committing banditry upon unwary outsiders.

A major article about the Dvezda Marches was published in Maiden, Mother, Crone.