Magic items, or magical items, come in many different forms and values, enhanced by many types of magic.[1] 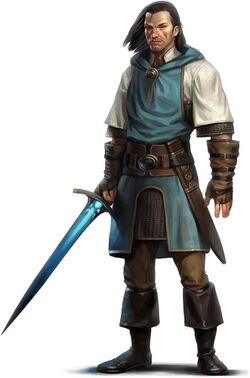 Magic items' powers protect them from many of the natural forces that would degrade mundane equivalents over time, and they can remain stable and usable for hundreds—even thousands—of years even when stored in unsuitable conditions.[2]

Those who craft or research magic items as an occupation are often called artificers.[3]

Sometimes a normal magic item can be badly constructed in some fashion, leading to the manufacture of a cursed magic item instead.[1] Most are created accidentally, but some are intentionally crafted to sabotage others or to gain a benefit even at the curse's often great cost. Black markets often attempt to pass off cursed items as counterfeit magic items, especially items that are initially beneficial but lose or twist their powers over time.[4]

Some magic items are intelligent, possessing some personality of their own.[1]

A rare few magic items are of such power that they are considered separately from mere magic items and are termed artifacts: minor or major in classification.[1]