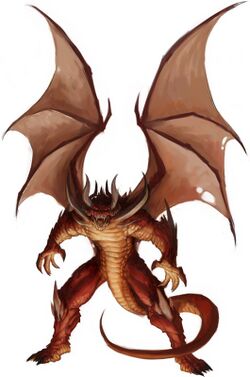 No matter the rank of a devil, knowing its true name could grant great power over it (or a horrible death).

A true name is a kind of hidden magic word inscribed upon each soul, though it is very hard to find a mortal's true name.[2][1]

Apart from intensive research, there are several ways in which to learn a creature's true name:[3]

For many creatures, the nature of true names may vary. For example,

When a creature, such as an aberration, celestial, fiend, monitor, or spirit enters the Material Plane from another plane or another universe altogether—one where the laws of magic are different—they may not have any true name and are designated as nameless things.[1]

Sometimes, a binder only knows fragments of a creature's true name, not the whole one. Still, they could try using the spell compel true name[7] with the fragmentary name, or another true name ability against the opponent creature, although this is very dangerous as incapacitation can stack with this usage.[4]

A further danger to the caster failing in the use of compel true name is that this reveals the caster's true name fragmentarily or fully to its opponent.[4]

Paizo published a chapter about true names in Pathfinder Secrets of Magic 244ff.