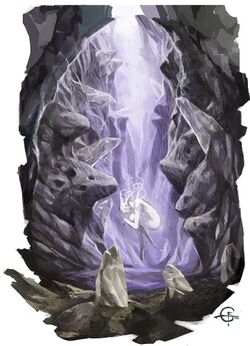 The Mordant Spire, home of the gray elves.

The elves of Mordant Spire (sometimes called gray elves or Spiresworn) are a peculiar and reclusive subgroup who dwell almost entirely on the island of Mordant Spire in the Steaming Sea, where they guard ancient Azlanti artifacts and patrol the many remaining islands of that lost continent.[1]

Mordant Spire elves are pale-skinned, aloof, and stand-offish. They usually wear masks, and speak only Azlanti to outsiders, as they are one of very few peoples in the Inner Sea region who still speak that language natively. They have a number of disturbing mannerisms. They rarely look at those they speak to, often cut off conversations in mid-sentence, and act as if they are listening to voices that no one else can hear.[2][3]

Mordant Spire elves who were also agents of the elven Winter Council were the first of their kind to recognize the danger of the approaching Starstone, and it was they who warned the elves and urged them to flee Golarion.[4] They traveled with most of their kindred to the distant realm of Sovyrian just before Earthfall. They returned as part of the general return of the elves in 2632 AR. They quickly rebuilt their home, and cut themselves off from the rest of the world. Claiming to be the protectors and true inheritors of Azlant, the Spire elves set about patrolling the waters above that lost continent to drive off any trespassers, a tradition that continues to this day.[2]

Most Mordant Spire elves live in a complex of floating wicker buildings around the island proper. They typically spend their time fishing and diving in the Steaming Sea, and tending kelp beds in the shallow waters around the Spire. Their reliance on the sea for resources means that they engage in little trade with outsiders. Formerly the enemies of ancient Azlant, they now profess to be the inheritors of that lost civilisation, and lay claim to all of its surviving relics. They are usually more than capable of protecting these items from treasure hunters, intercepting intruders using their famous fast-moving skimmers that may be magical in nature.[2][5][6]

Despite their antagonism towards anyone whom they perceive as wishing to plunder the artifacts of Azlant, the elves' frequent patrol of the waters around their island and above the sunken continent, give a modicum of relative stability to the region.[7] The elves' xenophobic attitude is not universal among all of its members, however, as a growing number of younger elves believe that much can be gained by expanding other races' access to the ruins of Azlant.[8]

The Amaranthine Council are the secretive leaders of Mordant Spire. They rarely leave the tower, so even gray elves know little about them, although rumors claim that purple vapor continuously billows forth from their otherwise empty eye sockets. They generally have a laissez-faire policy with regards to daily activities, but when the need arises, they issue cryptic edicts and demand strict obedience.[9]

The Listeners are the only elves (besides the Amaranthine Council) who reside within the Spire itself. They dwell in the Vigilant Halls in the Spire's upper chambers, where they spend their day scrying on Azlanti ruins and joining with the Mordant Spire's sentience. They gain their name from the whispers spoken to them by the walls of the Spire itself, said to be those of Acavna, the dead Azlanti goddess whose spirit formed the Spire.[5][9]

Mordant Censors are highly trained spellcasters and warriors who protect Azlanti relics and secrets, both on land and underwater. They employ concealment magic, swift rune-carved skimmers, threats, and memory-modifying magic, and resort to violence only when necessary.[9]

A caste of elven magi known as spire defenders accompany many gray elves who leave the island, acting as assistants and bodyguards. Because the work of Mordant Spire archaeologists and researchers often leads them to cramped, underground locations, spire defenders favor mobility over all else and eschew the wearing of even the lightest of armors.[10][9]

Shrouded Seekers are sages and archaeologists specializing in Azlanti lore and relics. Spire defenders usually guard them when they are exploring Azlanti ruins.[9]

Spire Envoys are diplomats in Almas, Augustana, and other major port cities in Avistan. They strive to convince humans not to explore Azlant, usually through diplomatic channels and political forums. Outwardly, they seem far less alien and aloof than their kin. Depending on the elf, this may be from training to hide their true selves, or from a real change due to a genuine appreciation for the freedom human cities allow.[9]

Veiled Lanterns are young, progressive gray elves who oppose the Amaranthine Council's isolationist policies and believe that elves and humans should unite against alghollthus and other common enemies. They are forced to meet secretly, yet their number continues to grow.[9]

The Vigilant Needle are a collective of spies, saboteurs, and assassins working in Absalom, Andoran, and other Avistani countries to prevent dangerous Azlanti relics and secrets from falling into the wrong hands.[9]

A myth among these elves is that of the Mistmourn, a human treasure-hunting vessel that sank fourteen of their ships before finally being sent to the bottom of the sea, is still plying the waters of the Steaming Sea, seeking the treasures it was denied in life.[7]

Mordant Spire half-elves, sometimes called Spireborn, are half-elves whose elven ancestry is derived from Mordant Spire elves.[11] Spireborn are valued as ambassadors and spies, useful for dealing with outsiders.[12]

The inhabitants largely keep to themselves, avoiding outsiders, but are among the few races who maintain cordial relations with the aquatic elves who live in the nearby waters. They benefit greatly from this relationship, as their water-breathing cousins occasionally bring up ancient Azlanti treasures from one of the many sunken cities on the seafloor, ensuring dangerous artefacts are left behind. Moreover, aquatic elves refuse to divulge information about the treasures to outsiders truly gaining the trust of the Mordant Spire elves.[13][14] This relationship is not always smooth, however, as some aquatic elves resent their land-bound cousins for making the occasional deal with other races, especially where access to the treasures of Azlant are concerned.[15]

Spire elves maintain cordial relations with the nearby merfolk community of Chosovosei.[16]

The elves of the Mordant Spire also have an established relationship with the nearby elves of Varisia's Mierani Forest, and the necromancer Giseil Voslil has served as the emissary in the settlement of Crying Leaf for centuries.[17]

The elves do have an established relationship with one non-elven organization: the Decemvirate, the leaders of Absalom's Pathfinder Society. Once every few generations, the Mordant Spire sends an envoy to the Grand Lodge to negotiate access for the organization to the lost treasures of Azlant. The most recent such meeting occurred in 4711 AR and was overseen by a Mordant Spire elf named Sephriel.[15]

The Mordant Spire elves have always been the alghollthus' bitterest foes. They fight them using strange, tentacle-like weapons that seem somehow alive. Leaders sometimes wear alghollthu eyes on their foreheads as trophies.[18]

Even though the elves jealously protect the ruins of Azlant, there is one island to which they allow unfettered access: the home of their ancient foe, the Azlanti lich named Auberon the Drowned. Auberon ruthlessly hunts the Spire elves (whom he incorrectly believes are responsible for the destruction of his ancient homeland), and uses their bodies to feed his undead army.[19]

Human colonists from Andoran established a settlement on one of the islands of Azlant some three centuries ago. Despite frequent attacks, the Spire elves were not able to dislodge these interlopers as they established their Sun Temple Colony. These attacks still occur today, although the elves have kept their distance for many years, ever since the colonists discovered a powerful artifact called a celestial lens.[20]

The brine dragon Rezlarabren maintains an ongoing trade relationship with the elves of Mordant Spire. Once a month she meets with their representatives on Thoska Isle and exchanges special salt from her mines for Azlanti treasures. The elves have attempted to expand their relationship with the dragon on numerous occasions in the hope of gaining her help against alghollthus, but she has always rebuffed them, convinced that she has nothing to gain from such an agreement.[21]

Paizo published a major article about the Mordant Spire in City in the Deep 76ff.