The island of Mordant Spire lies in the Steaming Sea on the southern tip of the Ironbound Archipelago, and is home to several thousand aloof and alien Mordant Spire elves, who are hostile towards intruders.[1][2] The island is one of the few inhabited remnants of Azlant, and the elves closely guard the secrets of the once-great continent in fear that trespassers would bring a second doom upon Golarion.[3] 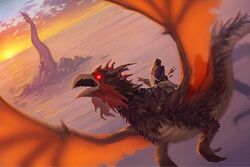 The Mordant Spire as seen from a distant aerial perspective.

The Mordant Spire sits at the most distal end of the Ironbound Archipelago in the Arcadian Ocean. Its closest geographic neighbor is Thoska Isle,[4] and a ship requires approximately ten days to reach the island from the Varisian city of Magnimar.[5]

Before Earthfall, the island of the Mordant Spire was home to a complex of towers and observatories used by the elves of Celwynvian for the dual purpose of studying the Moon and of keeping powerful magic away from the Azlanti civilization. This complex was abandoned when the elves fled Golarion as Earthfall approached, and the structures they had built on the island were entirely obliterated by the ensuing cataclysm.[6].

As the meteor called by the alghollthus approached Golarion, the Azlanti lunar goddess Acavna died attempting to halt it and fell to earth on the site of the elven observatory, destroying it and becoming buried deep beneath it. A twisted spire rose from the spot where she fell to earth, created by the goddess' spirit and drawn upward by its attempt to move on to Pharasma's Boneyard for judgment. The elves discovered the structure, which they named the Mordant Spire, on their return from Sovyrian in 2632 AR; they thereafter settled it to continue their original mission of safekeeping the knowledge of ancient Azlant.[6][7]

The masked elves of Mordant Spire have stood in opposition to the powers of the region for a very long time. They were enemies of the humans of ancient Azlant over 10,000 years ago, and of the alghollthus even before that. Upon their return from Sovyrian thousands of years after their escape from Earthfall, they once again took control of the island and cut it off from the rest of Golarion.[2] Only a relatively small group of elves dwells within the Spire itself; they are known as the Listeners, as the spirit of the goddess from whom the Spire was formed communicates with them. The remaining elves live in a system of floating structures around the island proper, subsisting upon the sea for resources.[6]

The island is dominated by a massive tower, which is surrounded by small rocky beaches. The elves also built floating platforms anchored to the sea bed.[2]

An elf gate links the Spire with distant Kyonin, but it is unclear whether it still functions—the elves on either side seem to have no interest in using it.[8]

Aquatic varieties of gelatinous cubes are rumored to be found wandering the sunken halls of lost Azlant off the shores of the island, but the Mordant Spire elves drive away most explorers before they can return with proof.[9]

Paizo published major articles about the Mordant Spire in City in the Deep 76ff and Mythic Realms 12-13.