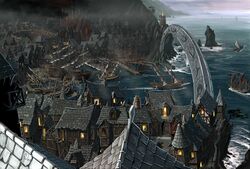 The Cyphergate is a cyclopean stone arch, straddling the entrance to Riddleport's harbor to a height of over 350 feet. Because its height is exactly half of the arch's width, it is believed by many that the arch is but one half of a larger ring, the second half of which is buried within the rocks and silt of the harbor bottom.[1] The origins of the Cyphergate are widely thought to be Thassilonian, as the monument is built from unrecognizable stone and is decorated with mysterious runes, similar to other magically preserved carvings throughout the Varisian countryside.[2] These runes are a topic for debate among scholars, both in the City of Cyphers and beyond. Some scholars believe they have no meaning, as they resist even magical detection methods, while others have formed a group called the Order of Cyphers and call themselves Cyphermages, dedicating their lives to uncovering the truth behind the enigmatic symbols.[3][4]

The truth behind the Cyphergate may have been recently discovered, almost by accident, by a group of drow elves of House Azrinae. Researching a way of looking back in time to observe the events surrounding Earthfall, the elves believe that the gate was used by Runelord Karzoug to peer forward through time, perhaps to predict Earthfall and avoid its destruction.[5][6]