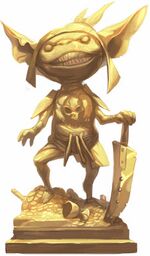 Saul Vancaskerkin was a moderately successful crimelord in the city of Riddleport and was the head of a sprawling family.

While he was a youth in Riddleport, Saul moved from gang to gang, selling out old bosses to gain favour with the next. His burgeoning criminal enterprise came crashing down when his son Orik murdered an alchemist named Falk Zincher. Falk's older brother and crimelord, Clegg Zincher, demanded revenge and took his rage out on Orik's father since the perpetrator himself had skipped town.[1]

In desperation, Saul tried to destroy key evidence with the help of his other son Verik Vancaskerkin, but he had grown sick of his father's criminal activities and abandoned his father to his fate. Saul suddenly found his home surrounded by the gendarmes and decided to set fire to his own residence in an attempt to fake his own death, killing his third wife Bertrida in the process. Despite his efforts to escape, he was nevertheless captured by the gendarmes and only narrowly avoided an execution. Instead (at Clegg Zincher's request), he was fined heavily and had his left hand taken as punishment.[2]

Although disgraced and considered washed-up by most, Saul managed to purchase and renovate the Gold Goblin gambling hall, opening the doors to the public in 4708 AR with the intention of scamming his patrons during a massive gaming tournament called "Cheat the Devil and Take his Gold". Although his plot failed and his business suffered, he nevertheless began regaining his reputation and client base over time.[3]

He was slain in the smuggler tunnels beneath the Gold Goblin that same year.[4]

Saul is father to Natalya, Orik, and Verik, and is brother to Damon Vancaskerkin. His niece is Lullaby (although she grew up in his household).