Situated on the Varisian Gulf at the mouth of the Chavali River, Roderic's Cove is a small town that serves as an alternative destination for merchants too nervous to dock at the pirate-controlled city of Riddleport.[1]

Roderic's Cove was founded about eighty years ago (around 4638 AR) as part of the wave of emigrants leaving the city of Magnimar, led by the notorious privateer Sir Roderic.[1] Looking for a smaller and less structured way of life, they founded such communities as Riddleport and Roderic's Cove. Most of these outposts did not survive, falling prey to native creatures or the countless other rigors of frontier life.[2] Roderic's Cove was built atop a traditional Varisian gathering site.[3] Despite attacks by the bandits and goblins of the Churlwood, not to mention countless pirate attacks, the town flourished. Approximately 20 years ago, the pirate captains of Riddleport finally decided that Roderic's Cove was too juicy a plum not to pluck, and brought the town under their control.[1][4] The town has continued to flourish, however, as the pirates of Riddleport have spared the town ensuring its success as a shipping and trading port.[5]

In 4708 AR, Captain Jess Gildersleeve, port-governor at the time, was discovered to have secret connections to Riddleport pirates. Shamed and threatened with arrest, Jess fled town with her nine-year-old daughter, Jana. Jess and Jana went to Riddleport and lived under the protection of the same syndicate that had been exploiting Roderic's Cove.[6] 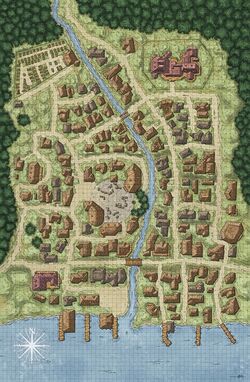 An overhead map of Roderic's Cove.

Roderic's Cove is a simple town, and even its most affluent residents never walk around with flashy clothes and items. Most buildings are made from timber, though some of the older homes have a stone-walled ground floor. Gravel made from shells paves the streets throughout town, and a small creek (Olivia Creek) powers a mill and provides fresh water.[7] Just south of the town, sprawls the expansive tangles of the Churlwood.[8]

Recently, tales of Sir Roderic's ghost have surfaced among the townsfolk as the cause of a mysterious wave of ship scuttling in the harbour; the leadership fear insurrection, however, and maybe this is the beginning of an all-out revolution.[5]

The town's leader bears the title of port-governor, but it is not a completely autocratic role. A small council of merchants and prominent citizens provides advice and support to the port-governor.[7]

The following locations of interest are located in and around the town:[7]