Riddleport is the third-largest city in Varisia and its most northern port. The city is a haven for pirates and sea-faring brigands, who find themselves far to the north of the Arch of Aroden. Teeming with criminals and rogues of all kinds, Riddleport is full of potential danger and hard-to-avoid intrigue. Also known as the City of Cyphers, Riddleport takes its name from the Cyphergate, a giant stone arch spanning the natural cove around which the city is built. It is covered on both sides with ancient Thassilonian symbols, although their exact meaning is unknown.[1] 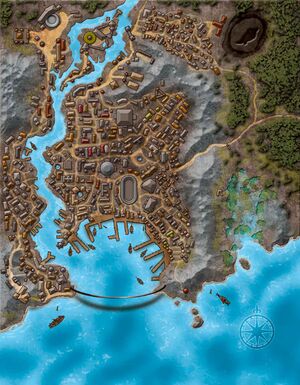 Riddleport is located on the northwestern coast of Varisia, where the mouth of the Velashu River forms a natural cove off the Varisian Gulf. Placed between two large rocky bluffs, each over 300 feet in height, the city occupies both banks of the river. The majority of the city is situated on the eastern bank, nestled behind the outer rim of the Calphiak Mountains, which cuts it off from hilly tidal swamps to the east. The Velashu finds its way through canyoned walls from the Velashu Uplands. Roads lead out of town to both the north and east, but they are poorly maintained, as most traffic in and out of the city is by boat.[2] The ominous Cyphergate, which towers over the entire harbor, is never out of sight, its rune-covered span dwarfing everything around it.[3]

Most of Riddleport's buildings are composed of wood with multiple floors and steep, high-peaked roofs. Stone fireplaces ward off the bitter winter cold and the chill that lingers in the fog-laden streets for much of the year, save for in high summer.[4]

The city is divided into nine different sections or districts, each with its own character and inhabitants.[5]

The town of Riddleport was founded in the 45th century AR as a hideout for pirates attacking Chelish shipping in and out of Korvosa. Since that time it has grown to become a true settlement in its own right.[2]

The first official pirate overlord was Captain Cabriem Maskyr, who took control of the settlement in 4558 AR.[6]

Most people see Riddleport as an anarchic abode of pirates and brigands, but the city has actually become quite a bit more stable in recent years. This is in large part due to the work and leadership of the titular head of Riddleport, the Overlord Gaston Cromarcky. Cromarcky has held the title of Overlord for over three decades, having inherited it in the usual way: by murdering the pirate captain who held it before him. At the beginning of his reign, he used what funds were left over from the previous Overlord to hire land-based mercenaries to maintain law within the city. These men were beholden only to him, and allowed Cromarcky to consolidate quite a bit of power in his office. In the past, Overlords had drawn their muscle from various pirate crews who owed numerous allegiances to their captains and rival criminal gangs.[7]

Cromarcky rules over the city with a light touch and with the consent and help of several powerful figures. When the time comes to choose a new Overlord, he will be drawn from this group. They include Avery Slyeg, who directs most of the major smuggling operations within the city, Varnal "Split Face" Knocmar, a master beggar and pickpocket, Boss Croat, an obese half-orc who controls the trade in illicit substances, Clegg Zincher who runs Zincher's Arena, Elias Tammerhawk, Speaker of the Order of Cyphers, Shorafa Pamodae, the high priestess of the temple of Calistria, and Ziphras, a wererat and gang leader.[8]

Each crimelord has his own small army of contacts, snitches, soldiers, fences, loan sharks, and specialists. They also form affiliations with pirate captains.[7] 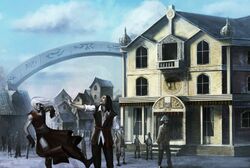 The Temple of Cayden Cailean

Riddleport's blind-eye approach to crime has led to a population largely skewed toward scoundrels, outcasts, and cut-throats who fill its harbor and dockside brothels. Despite the relative danger of the city, scholars and academics are also fairly common in the city, as the mysterious and massive Cyphergate presents a seemingly endless supply of research material for those interested in Thassilonian relics.[10][1] The presence of these scholars and mages seems to have added a tempering agent to the otherwise anarchic mix of pirates and cut-throats.[11] The city also sports a sizeable tiefling population, the largest in Varisia, and one of the largest in all of Avistan.[citation needed]

Unlike its more civic-minded neighbors to the south, Magnimar and Korvosa, Riddleport has only a single holding: the small town of Roderic's Cove.[12]