A cleric of Hastur holding a book inscribed with the Yellow Sign. 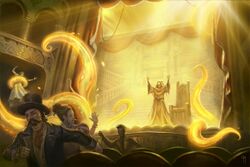 The power of Hastur is manifested.

Hastur[1] is one of the cyclopean entities known as the Great Old Ones. His unholy symbol is a three-sided, tentacled device known as the Yellow Sign.[2]

Worshipers have been known to plant enchantments on victims, steering them in subtle ways toward envisioning the Yellow Sign and putting their souls in jeopardy. Congregations of the faithful devote themselves to helping Hastur manifest his avatar, drawing forth his essence in chosen sacrifice. The unfortunate victim is then unleashed upon the world for the purpose of gathering mortals for Hastur's eldritch purposes.[3]

Hastur was first worshipped long before humanity arose on Golarion. On a distant, nameless planet, three great cities sat on three different shores of the lake of Hali: decadent Yhtill, anarchist Alar, and empty Carcosa, which was old and ruined before Alar or Yhtill was built. Carcosa and the King in Yellow, its mysterious immortal ruler, dominated the folklore of both Alar and Yhtill. It is suggested by some scholars that Carcosa was Hastur's home before his imprisonment.[4][5]

When the people of Alar attacked Carcosa to harness its power against Yhtill, the entire city and its inhabitants vanished without a trace. Time passed, and eventually, the Pallid Mask came to Yhtill so Hastur could call upon the Yellow Sign to have Carcosa consume it as well, and reshaped Carcosa into an instrument of his release and apotheosis into an Outer God.[5]

Hastur's real appearance is unknown. In his King in Yellow avatar, he resembles a humanoid clad in tattered yellow robes and shreds of cloth, with nothing visible under these clothes. He can manifest this avatar only on planets where the light of the star around which his prison-world orbits shines.[4]

According to most texts, Hastur is imprisoned in the alien city of Carcosa, but this is doubtful when one takes into account the relative ease with which he can manifest as the King in Yellow. Carcosa seeks to constantly consume other cities and grow in size, and when it grows big enough it will burst, turning Hastur from a Great Old One into an Outer God.[4]

The cult of Hastur is rarely interested in interacting with other religions, who in turn only bother with Hastur's cultists when they impersonate their own. Since Hastur and Shub-Niggurath are said to have mated, orgiastic rituals between their cults are frequent. The churches of Groetus and Hastur grudgingly respect each other due to their shared nihilism, but rarely form long alliances. Out of Golarion's deities, only Desna actively fights against the cult of Hastur.[4]

Hastur views Xhamen-Dor as an ally, but if the cults of both deities are active on the same planet, Hastur's followers often try to send Xhamen-Dor back to Carcosa and prevent it from triggering a premature apocalypse, as the world is worth more when consumed directly by Carcosa than indirectly via Xhamen-Dor.[6]

Hastur's followers avoid speaking his name aloud if they can, using his various epithets instead. They associate Carcosa with nihilism, Alar with disorder and Yhtill with decadence. They sometimes view him as the patron of shepherds, with humanity being the sheep to be gathered.[4]

Hastur's cultists have a paramount objective of keeping the actions and identities of themselves and fellow cultists hidden from infidels. Many maintain secret identities or pretend to worship deities like Abadar or Dispater (as well as Aroden prior to his death), and send assassins or monsters after those that uncovered their existence. Most of Hastur's cults pretend to be secret societies, whose initiates are unaware of the group's true nature. Revelations only occur when one ascends to the inner circle, and those who balk inevitably become sacrifices.[4]

Hastur is also worshipped by lone lunatics who view humanity as sheep and themselves as murderous shepherds with the right to determine life and death. Many of them fail to understand that they serve Hastur, but the damage they can inflict is great.[4]

Many millennia ago, during the Age of Serpents, a storm of Hastur-worshipping flying polyps landed on Golarion, hoping to infest it with the Great Old One Xhamen-Dor. They established two cities on Golarion: one at the current site of the Ustalavic town of Thrushmoor, and the other named Neruzavin in Casmaron. The former was destroyed by the serpentfolk in a massive battle that destroyed both armies, leaving only the Star Stelae as a reminder of their conflict.[7]

Hastur's faith is spread out across the Inner Sea region, usually confined to an extended family per area. His cult can most likely be found in Taldor, Razmiran, the Ustalavic county of Versex, the city of Quantium in Nex, some Galtan cities, and to a lesser degree in Restov, Lamasara, and Riddleport. In Razmiran, the cult of Hastur has been successfully infiltrating the church of Razmir.[4]

Paizo published a major article about Hastur, the King in Yellow in The Thrushmoor Terror.