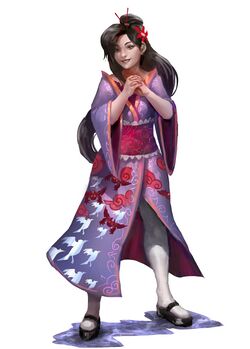 An argent dramaturge, with a dress incorporating a silver raven and devil motif.

Silver Ravens is the name adopted by two noteworthy groups of freedom fighters based in the former Chelish city of Kintargo.[1]

The original Silver Ravens were founded in 4606 AR, in the tumultuous time that followed the death of Aroden, by the elven folk hero Jackdaw, who gathered four like-minded Kintargan patriots: the half-elf cleric Amyreid, the human bard Kyda, the halfling wizard Ba and the human ranger Brakisi. Together, they protected the city from monsters and natural disasters and bolstered its public resources with their adventuring income.[2]

As the years rolled on, the Silver Ravens defended Kintargo from four attacks from House Thrune, one attack by the now-extinct House Borjanni, a skum invasion led by a cleric of Ovonovo, an infiltration by the vampires of the Nidalese Septimiax Society, as well as the blue dragon Rivozair. Key to their success was the "Song of Silver", a powerful bardic masterpiece that infused the city with powerful magic when performed by Kyda in the Kintargo Opera House.[2]

In 4640 AR, House Thrune launched its greatest invasion of Kintargo yet, with the support of a great army of devils. After Kyda and Amyreid were assassinated by the pit fiend Oughorthan during the final performance of the "Song of Silver", Jackdaw knew that the war was lost and surrendered herself to the Thrunes. Ba and Brakisi went into hiding as House Thrune started a campaign to erase all memories of the Silver Ravens.[2]

Not long after the end of the Chelish Civil War, Brakisi planned to abduct the son of Kintargo's lord-mayor, and killed his friend Ba when he tried to dissuade him. Brakisi himself was later killed by the Hellknight Reya Naulvaneti, who foiled his plot. Public opinion of the Silver Ravens degraded, and House Thrune found it much easier to make them fade into history.[2]

In 4715 AR, as Barzillai Thrune seized control of Kintargo, a new band of heroes rose against him and discovered the original Silver Ravens' legacy. They rescued Jackdaw from prison, resurrected the Silver Ravens, overthrew Barzillai, and established Ravounel as a new country independent from Cheliax.[1]

The current Silver Ravens make it their goal to free everyone who languish under tyranny throughout the Inner Sea region.[1]

Although Cheliax is officially an ally of independent Ravounel, the Silver Ravens secretly wish to foster rebellions across Cheliax, in the hope its citizens could free themselves from infernal rule. They have also turned their eyes to Korvosa and Rahadoum, where, respectively, the Shoanti and the religious are oppressed.[1]

In 4716 AR, when diplomats from the newly-independent country of Vidrian arrived in Ravounel, the Silver Ravens and the Vidric revolutionaries found a shared passion for fighting tyranny and helping those who cannot help themselves, and united under the shared banner of the Firebrands.[3] Due to the fame of the group, all Silver Ravens are considered fourth marks in the Firebrands.[4]