While their small stature generally keeps halflings out of the spotlight in human settlements, the small folk have nevertheless found a niche for themselves and play an important role in Golarion.

Halflings are short humanoids and among the smallest of the civilized races of Golarion. They tend to be around three feet tall, though mostly human in proportion, with perhaps rounder heads and slightly more childlike proportions. Their coloration is as variable as the locales they call home. Their skin tends to be somewhere between a rich almond color and a pale nut-brown. Many have brown hair, though quite a large proportion of them are as fair as the Ulfen. The eyes of halflings tend to be fair, with green and blue being the most common colors. Many, though not all, have variations in color that make them seem more similar to other humanoids, typically humans, who live in the region they share. All halflings have very durable feet, the soles of which are very tough. As such, they rarely wear shoes, though some wear spats. Halflings have a fine growth of soft, warm hair on the tops of their feet to keep them warm,[1] and have slightly pointed ears.[2]

Sexual dimorphism in halflings is similar to that in humans, with males being slightly larger and heavier, though many of the larger races do not notice this difference which seems much more obvious to the small folk. Males generally only grow facial hair as sideburns, and tend to be a good two to three inches taller. Females are slimmer and shorter, appearing much like a human woman of half size, though both sexes typically have pleasant round faces, and big cheery smiles.[1]

Their small size allows adventurous or guileful halflings to get into some rather tight spots, and they use their cunning and uncanny luck to get out of just as many, if not more, tough situations.

Most dress in styles similar to that of their human neighbors. Halfling slaves dress more ostentatiously than their free brethren, albeit in cheaper fabrics. This is especially true in Cheliax, where their masters see them as status symbols and markers of wealth.[2]

Halflings are generally easy-going yet excitable, staid and yet frenetic if roused. Their greatest advantage is ironically their perceived physical weakness, as halflings know that they will usually be underestimated by the larger folk.[2]

Despite their often menial work, halflings on the whole (and especially younger halflings) tend to always keep an eye open for the next opportunity, hoping to improve their lot. This can make them seem danger-seeking to other races, and while it is true that halflings can take extraordinary risks if they believe it will bring them great reward, they are also better at spotting danger. This has given them the reputation for being lucky, but halflings generally dismiss these claims as resulting from their superior reflexes, cunning, and broad skill base. There are a few halfling individuals, however, who seem to be magnets of bad luck, and they are generally avoided. Instead of a being a curse, most halflings think of these individuals are being blessed by Desna, and young people bearing this gift are often encouraged to study magic.[2] Others, known as jinxes, are able to turn their luck around and inflict it as bad luck on others. While some believe this to be unfair and underhanded, jinxes contend that they are only evening the odds.[3]

Halflings’ natural wanderlust and opportunistic nature make them ideal adventurers. Many people put up with their vivacious attitudes in return for the natural talents they provide and the popular superstition that traveling with a halfling is good luck. Halflings make great clerics and rogues, but many also become monks or rangers.[4] 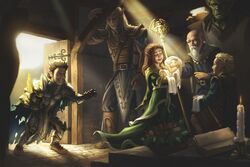 The halfling blessing of birth.

Halflings grew up among the human cultures of Avistan, alongside and often overlooked by the growth and success of those nations and regions they inhabited. They have their own rich tales and heroes that few of the bigger folk have ever even guessed at. Finding evidence of halflings throughout the ages is difficult, as history generally focuses on the human societies, overlooking the smaller folk in their shadows. The first recorded evidence of halflings is from Ancient Osirion,[5] although the elves claim to have noticed the race before Earthfall.[6] Despite this, little is mentioned of halflings during this time.

Halflings are generally easy-going yet excitable, staid and yet frenetic if roused. Their greatest advantage is ironically their perceived physical weakness, as halflings know that they will usually be underestimated by the larger folk.[2] 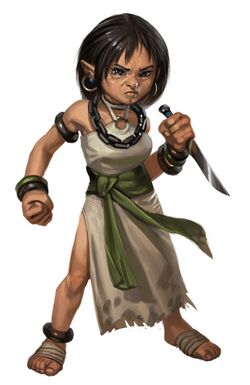 During their younger years, halflings often feel drawn to leave their stable and altruistic communities, and strike out on their own to seek their fortune. This leads many young ones to become vagabonds, traveling about and living by their wits and what they can steal. Once this wanderlust wears off, they often discover a profound longing for home and hearth, and spend years maintaining and improving their domicile, and taking joy in the simpler things in life.[2]

Halflings most often speak Taldane, but they also have their own racial language that is also called Halfling.[2]

Most halflings worship the human gods popular in their homelands, specifically those who emphasize community, beauty, honor, and freedom such as Abadar, Cayden Cailean, Desna, Erastil, Iomedae, Sarenrae, and Shelyn. There is a sizable minority who worship the aspect of Norgorber known as the Gray Master, while more sinister cults venerate him as Blackfingers.[2]

Halflings often work in service professions such as maids, cooks, and innkeepers, which leaves them in the perfect position to observe the world around them. This knowledge is invaluable to a halfling, given their generally defenseless position. It is not uncommon for halflings to be exploited for their labor, and they are one of the most common races of slaves in the Inner Sea region, especially in Cheliax (see Cheliax).[7] 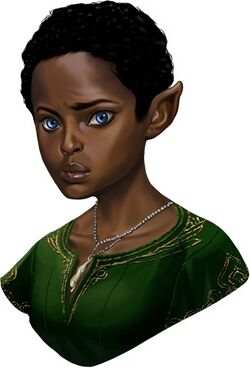 Although halflings in the Inner Sea region are most commonly found in the nations of Andoran, Cheliax, Galt, Isger, Molthune, Nidal, Taldor, and Varisia, they are a travelling race and have spread to nearly all corners of the globe,[2] even to far-away Arcadia, where they are one of the most populous races.[8]

The nation of Cheliax is notorious among halflingkind, as they are treated worse here than in nearly any other part of the world. Known derogatorily as slips, the Chelish have nothing but contempt for them, and generally keep them as slaves.[9]

Mihrinis of Iobaria adapted to the region's colder climates, but suffered greatly from the Choking Plague centuries ago and scattered to the edges of Avistan.[10]

The treatment of halflings in Isger is similar to that in Cheliax, and the former has one of the larger halfling populations in the region.[11][12] Many are bought by the Church of Asmodeus to work in the many orphanages that sprung up as a result of the Goblinblood Wars over a decade ago.[13]

Song'o are reclusive, dark-skinned halflings who live in Vidrian's Laughing Jungle, a part of the Mwangi Expanse in Garund.[14]

Jarics, a society of mountaineering halflings who live in the Barrier Wall mountains bordering the Mwangi Expanse, are rugged and known for forming boisterous groups known as "bill-bands".[15]

Tribes of demon-worshiping cannibal halflings are said to inhabit the Kaava Lands of the Mwangi Expanse.[16]

A small population of Othoban halflings, who hail from ancient Thassilon, were transported across time to modern Varisia when Xin-Edasseril was revived.[17]

Uhlam halflings, known for their love of intricate crafts and works, have inhabited the Verduran Forest for centuries.[18]