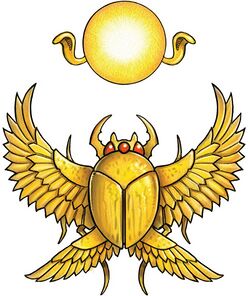 The symbol of Osirion.

Osirion is one of the oldest of the nations of Golarion, having existed in one form or another since the beginning of the Age of Destiny. Throughout its long history, it has seen periods of greatness, and periods of decline.[1]

Age of Destiny and the First Age of Osirion 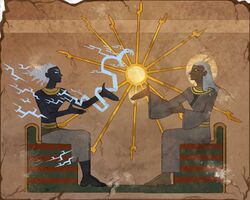 A piece of art from Ancient Osirion depicting Nethys.

Osirion is believed to have been founded around -3470 AR.[2] At that time, most of the Inner Sea region was living in barbarism, as civilisation had yet to recover from the devastation caused by Earthfall in -5293 AR. According to legend, a prophet of Nethys called Azghaad unified the tribes living alongside the Sphinx River and established his capital at Sothis. He became the first pharaoh of Osirion, and he and his successors were revered by the populace as God-Kings.[3][4]

It is believed that the ferocious spawn of Rovagug known as Ulunat was slain by Azghaad with the help of Nethys himself, after which Azghaad founded Sothis around the creature's gargantuan carapace.[4] According to one story, the threat of Ulunat played a major role in uniting the tribes, and after its death, they laid claim to its territory—a vast swathe of land stretching from modern day Rahadoum to modern day Katapesh.[5] The borders of Ancient Osirion did eventually encompass all that territory,[6] but there is little evidence to support the theory that the God-Kings ever used the slaying of Ulunat to justify their wars with their neighbours.[citation needed]

After Ulunat's defeat, Azghaad ordered the construction of a massive temple to Nethys that was completed in -3399 AR. Its dedication is generally considered the beginning of the First Age of Osirion.[4]

Azghaad's rule came to an end in -3412 AR, after which the Naga Pharaoh began her troubled rule. The Naga Pharaoh, whose true name has been lost to time, was troubled by violent visions and nightmares sent by Nethys, sent by the god to demonstrate magic's destructive potential. These visions eventually pushed her into a destructive rage in which she tore down Nethys' temple, perishing in the conflagration.[4]

Osirion, in its early years, advanced rapidly from barbarism into civilisation. The nation soon became both a cultural and a military success. Some less mainstream historians speculate that the nation may have received outside assistance, perhaps from strange entities from the Dark Tapestry.[7]

At this time, the Jistka Imperium was the most powerful nation in northern Garund. Osirion was the major cause of Jitska's subsequent decline. Jistka's previous trading partners found it more convenient to trade with newly-emerging Osirion, and Osirion was able to ally with the warlike desert nomads of the Tekritanin League against Jistka.[6] By -2764 AR, the Jitska Imperium had collapsed and Osirion was preeminent in the region. In -1452 AR, they also broke the power of their erstwhile allies of the League.[2]

At its height (roughly around -3000 AR),[8] Ancient Osirion controlled all or part of modern day Rahadoum, Thuvia, Katapesh, Nex and Geb.[6] In the latter part of the Age of Destiny, the country fell into the hands of a succession of poor rulers, and also suffered attacks from beyond its borders. The once mighty nation entered into a prolonged period of decline and began losing territory.[3]

Second Age of Osirion, or the Age of the Black Sphinx

Ankana, the Radiant Pharaoh and one of the four Pharaohs of Ascension.

The decline was temporarily halted by the advent of the four Pharaohs of Ascension. These four powerful leaders entered into a magical pact in -1498 AR, and their combined powers were such that the empire entered into what many considered to be Osirion's Second Age[2] (sometimes referred to as the Age of the Black Sphinx).[9] The rule of the Four came to an abrupt end in -1431 AR, and the decline resumed. It is not clear when Osirion lost control of the lands of Nex and Geb, but the two countries were sufficiently independent to engage in a long and devastating war against each other from -892 AR.[2] Katapesh passed out of the region's history for thousands of years, until circa 2200 AR.[10]

In -841 AR, the governor of Thuvia was assassinated. The authorities in Osirion took the decision not to replace him, calculating that the province had become more trouble than it was worth. With the withdrawal of Osirian government, the former province descended back into barbarism.[2]

The early years of the Age of Enthronement passed quietly for Osirion. The nation was not affected by the steady expansion of Taldor and Kelesh. Kelesh gained a foothold on the Inner Sea region in -43 AR when Qadira became part of the Empire but went no further for the next fifteen hundred years.[2]

The Keleshite Satrapy of Osirion

Eventually, the Keleshites found Osirian complacency impossible to resist. Agents from Qadira infiltrated the already corrupt civil service and made it even more moribund and slow to react. A series of slave revolts were engineered, and the state proved incapable of coping with the crisis. Pharaoh Menedes XXVI went into hiding. In 1532 AR, the Empire of Kelesh intervened in order to stage a "rescue", and when the dust had settled Osirion had become a client state, ruled by a Keleshite satrap loyal to the Padishah Emperor.[2][1]

This was the cue for widespread Keleshite migration to Osirion. Many monuments from Osirion's past were destroyed in order to facilitate the smooth transition of Osirion into the Empire. The worship of Sarenrae was introduced and promoted. The fiercely nationalistic Osirians were unimpressed by the first two measures, but responded all too well to the third. The result was the formation in Osirion of the militant Cult of the Dawnflower, which began to make the Keleshite satraps more and more nervous. In 2217 AR, the current satrap exiled the cult's leadership to the deserts of Thuvia.[2][1] (A splinter group chose to establish themselves in Katapesh instead).[11]

In 2253 AR, the satrap was found dead in one of his own fountains, with sunflowers sprouting from his mouth. After this show of force, the next ruler was much more sympathetic towards the Cult. They returned from exile, and rather than being governed by Keleshite satraps Osirion was now ruled by Keleshite sultans more or less independent of the Empire. 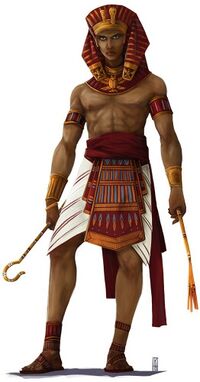 The status quo continued into the Age of Enthronement, with Osirian nationalism simmering beneath the surface but lacking a leader to rally behind. In 4609 AR, an Osirian cleric of Abadar called Khemet announced that he could trace his lineage back to a dynasty that had ruled Osirion before the Pharaohs of Ascension. He also demonstrated he had the support of the elementals of the desert. The native Osirians acclaimed him as their new pharaoh, and he gained control of the country in an almost bloodless coup.