Ra is the ruler of the deities in the Osirian pantheon and the legendary king of Osirion during the Age of Creation. He represents the sun and fair, just, honourable rulership, and is credited by many Osirians to be their creator.[1]

Ra is a powerful falcon-headed man with a sun disc blazing above his head.[1]

Ra travels on a great barge through the heavens.[1] 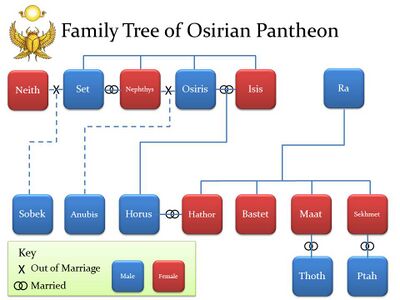 A Family Tree of the Osirian Pantheon.

Ra is the father of Bastet, Hathor, Maat and Sekhmet, and the creator of many other Osirian deities. Thoth, his son-in-law, serves as his counsellor and secretary, and Wadjet supports him as the patron of kings.[1][2]

Apep, the great serpent who seeks to consume the sun, is Ra's arch-enemy whom he has to fight every night to protect the sun; he is often aided in this great battle by Bastet, Horus, Selket and Sobek.[1][3][4][5][6] Every sunrise is seen as evidence of Apep's defeat at Ra's hands, albeit a temporary one until the sun rises no more and everything ends.[1][7]

Ra is worshipped by both pharaohs and paladins fighting against darkness as well as by commoners. Obelisks representing petrified sunlight are always found in Ra's temples, which are open to the sky and where services are held in daylight.[1]