The goddess Gyronna is also known as the Angry Hag, and for good reason.[2]

Gyronna claims many realms as her own including the Abyssal realm of Muravelara, a wooded hunting ground.[3] 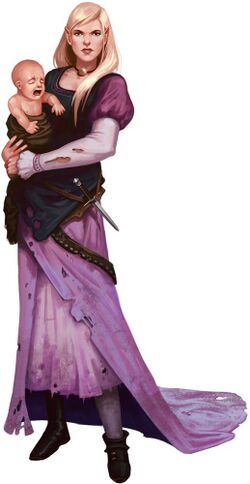 She is not a popular deity, as many fear her and her clergy, which is entirely female. These are usually the throwaways of society: disfigured prostitutes, wives caught in adultery, or pregnant teenagers disowned by their parents. Priestesses are renowned for their ability to foster hatred and turn friend against friend, but are not above simply killing someone in cold blood if it betters suits their purpose. Her priestesses are also known to swap young babies for hideous monstrous creatures birthed from their own womb.[2][4]

The priesthood itself has no canon or book of scripture, or temples; instead, they favor small shrines of simple piled stones. Some of these piles have cat's-eye gemstones on top or a painted representation of one, from which (it is rumored) Gyronna, herself, may peer and curse defilers of the shrine.[5]

The Black Sisters of Gyronna are blamed for causing the downfall of Heibarr in the River Kingdoms. The ruins of the town are now a site of pilgrimage for some priestesses.[6]