Grand Prince Stavian III is the current monarch of the nation of Taldor.[1][2]

As a ruler, Stavian III is as dissolute as the rest of his nation, and prone to much bitterness. He is an awkward man who dallies in frivolous activities and surrounds himself with sycophants, while the actual management of Taldor is left to the bureaucracy.[3] Despite his licentious behaviour, Stavian III has proven himself a cunning administrator and has strengthened the position of emperor since the weak rule of his father, Stavian II.[4]

Upon his appointment as Grand Prince, Stavian reinforced his position by ordering the construction of Stavian's Hold, a frontier town on the edge of the Whistling Plain. He launched a massive public works and military campaign to support this move, but his master-stroke was to persuade many of the wealthy nobles to fund and support this venture, convincing them that their involvement would garner them great honour and prestige. These were the same royals to have troubled and weakened Stavian II during his rule.[4]

In order to further strengthen his empire and to gain loyal supporters, Stavian III also created an incentive program which promised formal titles to anyone willing to claim lands from rogue lords.[5] This ensured that lords regarded as "unworthy" of their position by the crown could be forcibly removed and replaced by individuals loyal to the Grand Prince.[citation needed]

The Grand Prince has taken a great interest in the historic and cultural legacy of Old Taldor, and has gone to substantial lengths to keep such relics within the borders of Taldor. Under his direction, heavy taxes and tariffs have been imposed on all antiquities being sent out of the country.[6] 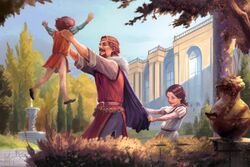 Formerly married to Etroffe, Stavian III had two children shortly before her death. The eldest is his daughter, Princess Eutropia, and his son was born two years later. Stavian's sole son and heir, Carrius II, was accidentally killed by Stavian during an argument in 4698 AR.[7] Stavian would hide his crime by making it look like his son had died in a horseback riding accident.[citation needed]

Unwilling to remarry, Stavian has only one surviving child, Eutropia, which is problematic as Taldor has always practised agnatic primogeniture, or sole inheritance by the oldest son. Eutropia intends, nevertheless, to take the throne upon her father's death, by force if necessary. Her headstrong attitude and progressive ideals do not sit well with the aging Crown Prince.[3]