Barbazus, or bearded devils, serve as Hell's elite shock troops, leading hordes of the damned into combat for their infernal masters.

The first barbazus were created by the archdevil Barbatos. When Barbatos first arrived at the gates of Hell following the death of Typhon, the original ruler of Avernus, he brought with him an entire world's worth of mortal souls. As a gift to Asmodeus, Barbatos transfigured these damned souls into the first bearded devils. This so impressed Asmodeus that he named the Bearded Lord the new gatekeeper of the Pit. Since then, the semi-living plane of Hell has learned to create barbazus of its own accord, and bearded devils now count among the most common infernal denizens.[1]

Barbazus are roughly humanoid in appearance, although they would never be able to pass for human. Designed for battle, bearded devils are heavily built and strong, fighting in a stooped position bowed under the weight of their own muscles. They are six feet tall when standing up straight, but appear shorter because of their stance. Barbazus are covered in thick scales that provide protection equivalent to heavy armour, helping them survive Hell's battlefields. This thick armour means they weigh upwards of 200 pounds.[2]

A bearded devil's most famous feature is the beard for which they are named, made of sharpened, dirt-encrusted tendrils that twitch and move of their own accord. Bearded devils often grab an opponent, pull them in close, then flay them with its sharpened beard. Practically all barbazus also wield serrated glaives; this vicious-looking weapon allows them to reach opponents from behind their own troops.[2] 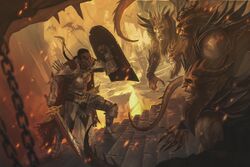 Barbazus are often found serving spellcasters and worshippers of Asmodeus on the Material Plane, where they are ruthlessly effective soldiers.[2] Spellcasters normally offer a bound and helpless captive for a bearded devil to slaughter during their summoning, as it makes the bearded devil more likely to comply. Bearded devils all pay some respect to Barbatos, the mysterious archdevil of Avernus and their creator.[4]

Bearded devils are normally created from lemures in an agonizing process. The prospective bearded devil is impaled alive on a spiked glaive and left there for decades. The transformation is complete when the devil finally has the strength, will, and self-control to pull itself free of the glaive.[5]

Barbazus have fewer magical abilities than most devils, relying on their brute strength in combat. Like most devils, they are capable of teleportation and summoning either a single bearded devil or up to six lemures at a time. In addition to inflicting vicious wounds, their lashing beards also spread a disease known as devil chills. Finally, when wielded in their hands, their wicked glaives inflict terrible bleeding wounds that are particularly difficult to staunch.[2]