Imps are the weakest of the true devils, but also the ones found most frequently on the Material Plane.[1] 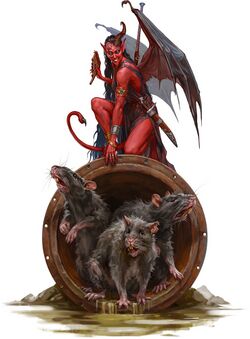 An imp is a tiny humanoid creature, two feet tall, weighing ten pounds, with a three-foot wingspan and a scorpion-like tail. Beyond these common traits, imps vary widely in appearance, with various fiendish and bestial traits. Most, though, have red skin and bulbous features.[1]

An imp is created directly from a lemure, usually by pit fiends or infernal dukes in need of disposable couriers or other menial servants, accounting for their vast numbers. They are craven, fawning weaklings who obey stronger creatures without question. However, imps are not stupid, and use their positions of servitude to whisper in the ears of their masters and manipulate them toward evil ends.[2]

Very commonly summoned to serve as familiars, imps willingly serve mortal spellcasters, but work to secure their masters' souls for Hell. Imps are easy to summon, and they delight in any chance to do evil on the Material Plane.[1] They give their masters tidbits of diabolic knowledge in exchange for increasingly petty and evil acts. When being summoned, they favor small sacrifices, such as a heart cut from a still-living dove.[2]

Imps commonly find themselves free to roam on the Material Plane, usually when they have betrayed their own masters. These pests commonly set themselves up as petty lordlings over tribes of goblins or kobolds.[1]

Most imps lack the ability to communicate through telepathy like most devils. However, they can innately sense magic or sources of goodness, turn themselves invisible, subtly influence other creatures with enchantment, and produce simple divinations. An imp commune with the greater powers of Hell once per week. Most imps can shapeshift into the form of a single animal to disguise themselves, typically a boar, spider, rat, or raven.[1]

One in a thousand imps is an imp consular, capable of the standard diabolic telepathy and able to transform into a wider range of small animals. Imp consulars are valued by greater devils and especially skilled at corrupting mortals. Imps with yet other variant abilities are also thought to exist.[1]

Due to its history of devil-worship and concentration of wizards, imps are extremely common in the city of Korvosa, especially in the vicinity of the Acadamae and in the ramshackle neighborhoods of the Shingles. They frequently clash with the city's population of good-hearted pseudodragons.[3]