The onidoshi, also known as ogre mages,[1] are the most common sort of oni—a fiendish spirit cloaked in living flesh, manifested in the form of an ogre. Onidoshi are often found as leaders of ogre tribes, while others become lone marauders who hold whole villages as hostages, demanding regular tributes in the form of gold, food, or maidens.[2] 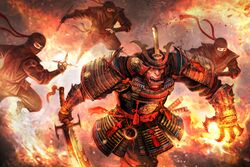 Like all oni, onidoshi have the powers of regeneration and shapeshifting. As befits their name, they also have a suite of magical abilities. Despite their lack of wings, onidoshi can fly unaided.[2]

Onidoshi originated in Tian Xia, but have also become common in the Inner Sea region, where they are the best-known race of oni.[3] The lusts of onidoshi are responsible for small pockets of oni-spawn tieflings in both the Hold of Belkzen and Cheliax where they have historically served as mercenaries.[4]