This article is about the magical beast. For the ship that sometimes goes by the name Sea Serpent, see Stargazer.

A sea serpent is a legendary, serpentine giant ocean monster.[1]

Sea serpents resemble immense aquatic snakes that sport a single frill running the length of their body. A typical sea serpent is approximately 60 feet long and weighs around 4,500 pounds, but can also be much larger. Old salts have claimed sightings of sea serpents over 300 feet long, which would make them some of the largest creatures in the oceans.[1] 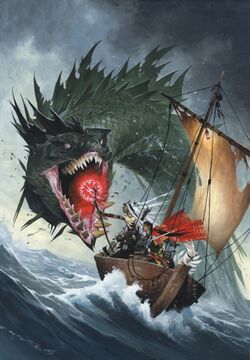 Sea serpents are fundamentally mysterious creatures. Their bodies seemingly naturally repel divination magic, and they can swim at incredible speeds without leaving any trace of their passage. Proof of their mere existence is scarce. Despite their majestic and mysterious appearance, sea serpents possess only an animal level of intelligence, and the danger they pose to vessels that spot them depends entirely on how hungry they are.[1]

Sea serpents rarely mate, and do so typically only when a female in heat happens to pass through a male's territory. Sea serpent are ovoviviparous, and after mating the female retains her egg inside her body for about one year until her young hatches and emerges, fully formed and 10 feet long, into the world. Young serpents remain with their mothers for a couple of years after birth, then leave to make their own way in the seas.

Sea serpents grow continuously for the first 20 years of their lives until they reach about 60 feet long, after which they mostly grow in girth and strength. After 150 years, sea serpents begin to undergo intermittent growth spurts that add 10 feet to their lengths every decade. It is not known how long sea serpents live, although reports of specimens over 300 feet long suggest that their maximum lifespans and sizes are both very great.[2]

Sea serpents are predators that primarily hunt large oceanic creatures, such as whales, sharks, and walruses, although some are known to prefer to target humanoids. They are particularly attracted to cephalopod prey, such as giant squids and krakens, although krakens are too powerful for all but the oldest and most powerful sea serpents.[2] In desperation, addus attempt to kill and eat sea serpents, and their battles are legendary among sailors.[3]

Sea serpents dwell in the depths of the ocean and are normally only encountered out of sight from shore, and even then only very rarely. Sea serpents are notoriously solitary by nature and animalistic in their behaviours, and only seek each other out to mate.[2] Despite their immense size and potential threat (they are known to have a particular talent for capsizing ships), sea serpents possess a strange allure. Seafaring folk see them as an omen—sometimes good, sometimes ill—but rather than scare away sailors, the sight of one in an area is more likely to draw curious seafarers who want to see such a legendary beast.[1]

Sea serpents are found in almost every sea and ocean in Golarion, and are typically feared and respected by those with whom they share the waters. Relationships between sea serpents and humanoids can vary significantly; the serpents of the Arcadian Ocean and Steaming Sea are often at odds with the Ulfen and Erutaki peoples whose vessels they attack,[5][6] while those of the Obari Ocean are seen as signs of good luck by the fishermen and sailors of Jalmeray, who often give them tributes of fish.[5]

Near Tian Xia, sea serpents menace ship crews on the Okaiyo Ocean[7] and feed on aquatic life in the Songil Sea.[8]

An organization known as the Serpentine Lodge, a loose grouping of seafarers and monster hunters based in the Varisian city of Riddleport with chapters in numerous locations around the Inner Sea, is dedicated to tracking, capturing, and slaying sea serpents and highly regard confrontations between hunters and these powerful creatures. The Eleder chapter is particularly dedicated to confronting the serpent known as the Ashen Worm, a legendary creature responsible for the losses of multiple ships.[9]

Other well-known sea serpents include:

Sea serpents are often revered by worshippers of Gozreh, who view the creatures as important omens. Followers of Erastil view the slaying of a sea serpent, and the subsequent distribution and consumption of its meat and use of its other remains to create tools and build houses, as noble acts. Lamashtu's faithful worship sea serpents as heralds of calamity and glory, and as incarnations of power and hunger.[5] Some evangelists of Besmara can summon a sea serpent at their deity's behest.[15]

The elemental lord Kelizandrika takes the form of a tremendous sea serpent with crystalline scales.[16]