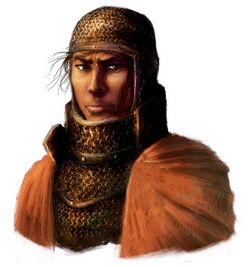 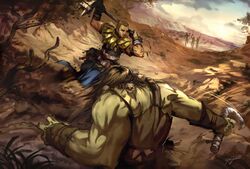 A Shoanti warrior encounters an ogre.

The Shoanti (pronounced show-AHN-tee)[1] are an often nomadic people who live in the Storval Plateau and Velashu Uplands regions of Varisia and well as the Hold of Belkzen and the Lands of the Linnorm Kings.[2] Like their Varisian cousins, these humans descended from the enslaved workers of the ancient empire of Thassilon, but have since developed a unique and advanced culture of their own.[citation needed]

The origins of the Shoanti people can be traced back over 10,000 years to before Earthfall, specifically to the well-known Thassilonian Empire. They were enslaved by the runelords who trained them to become their warrior caste. After Thassilon's fall, the Shoanti struggled as best they could through the many hardships of the Age of Darkness. The Shoanti share ancestors with the Varisian, Ulfen, and Kellid peoples, and their language is a combination of all three, together with Thassilonian[3]

For thousands of years after Earthfall, the Shoanti lived in relative peace with the Varisians who shared their lands. Their primary conflicts were with the wild beasts of the region, raiding orcs from the east and barbarians from the north, and the harsh landscape itself.[4] When the Chelish Empire expanded into southern Varisia through Bloodsworn Vale in 4406 AR, the Shoanti found themselves facing a new enemy: colonizers from the south. The battles between the people of what would become Korvosa and the Shoanti raged for decades, finally ending in 4488 AR. The Shoanti were finally forced to retreat to the Storval Plateau by the Chelish forces in 4507 AR, and the bad blood sown between them remains until today.[5][6] 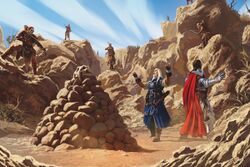 Shoanti skin tones vary widely from fair but deeply tanned to dark brown, but most have a ruddy complexion.[2]

Shoanti culture has been formed by near-constant conflict with their challenging environment and their various human and non-human neighbors. This has made them a largely tenacious, stalwart, and mistrustful people who are oath-sworn to retain their lost homelands, and honor-bound to defeat all who would dismiss them as primitive barbarians.[2]

The name given to Shoanti at birth is generally only used during their childhood, or later in life by close family members or lovers. Shoanti receive their adult name after their rite of passage during adolescence (see below). If a Shoanti is ever expelled from his or her tribe, the individual generally reverts back to their birth name, a sign of great shame among Shoanti.[2]

Coming of age and tattoos

As youth, all Shoanti must undergo a rite of passage before they are considered an adult. Upon completing this trial they are granted their first tattoo, each of which is specific to the individual's tribe. These tattoos are chosen by a tribe's shaman, and are drawn from an extensive cultural catalog of images and totems. Shoanti use these tattoos as marks of honor and accomplishment. At this time, Shoanti youth are also given their full name: a phrase that is generally an honorific that will become the individual's most commonly used name.[2][7]

Shoanti as a whole embrace a wide range of religious beliefs including ancestor worship, totemism, and the veneration of traditional gods such as Desna, Gorum, Gozreh, and Pharasma.[2] 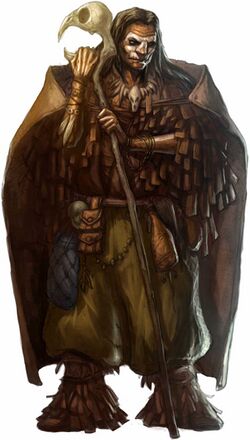 Despite their common heritage, the seven tribes (or "quahs" in their native tongue) of the Shoanti are quite different from one another in terms of traditions, beliefs, and overall world-views. In most cases, loyalty to one's tribe is paramount in the life of a Shoanti, but what this means is specific to the individual clan. Occasionally a quah will adopt a non-Shoanti into the tribe, but never an orc, half-orc, or Chelaxian.[10] Some scholars view the Ulfen-descended Horsemen of the Velashu Uplands as being akin to an unofficial eighth quah of the Shoanti; the Shoanti themselves forcefully refute any such suggestion.[11] Open warfare between the quahs over resources, land, and politics are rare, and are generally seen as distasteful. When disagreements do escalate, they tend to be resolved through small skirmishes or battles between chosen champions.[2]

The Lyrune-Quah are said to be among the best archers and hunters of the Shoanti people. Traveling under the bright Storval moon, and hunting by the illumination of the stars in the vast Varisian sky, members of the Moon Clan recognize that a well-aimed arrow is as effective, if not more so, than a whole band of raging brawlers.[12] Their territory is in the Cinderlands of Varisia.[2]

The Shadde-Quah make their home in the cliffs and vales of the Calphiak Mountains in western Varisia and the southern Lands of the Linnorm Kings. Hardy, proud, sea-faring people who are expert divers and fishermen, the Shadde-Quah are mistrustful of outsiders and tend to attack intruders on sight if they are not of Shoanti heritage.[14][2] The Shadde-Quah have virtually no interaction with the nearby town of Riddleport, which they perceive as a settlement of dishonourable, untrustworthy criminals.[15]

Tattoos with the themes of vitality, endurance, and the ocean are valued. Desirable runes are Vonark (Many Arms), Donark (The Long-Armed), and Eanaw (The Endless Journey). Revered totems include cave bear, cliff, dire bear, eagle, sea, squid, and water elemental.[13]

Of all the Shoanti tribes, the Shriikirri-Quah possesses the strongest animal affinity, and revere them as holy and mystic. Ever learning from the beast with whom they share the land, the Hawk Clan is perhaps the most peaceful of the quahs, and they serve as the emissaries to the outside world. Their connection to animals also make them the greatest animal trainers among the Shoanti.[2][16] Even though they travel widely, they can generally be found in north-central Varisia.[2]

While the Shriikirri act as diplomats to outsiders, members of the Shundar-Quah act as mediators between the Shoanti clans. Their primary ambition is to see the Shoanti unified as a single people, despite the differences that separate the seven quahs.[17] The peace that generally reigns between the quahs is largely due to their efforts. They clan reveres and dwells among the Thassilonian ruins on the Storval Plateau and western Belkzen.[2] 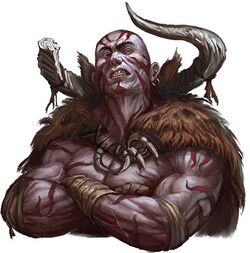 By far the most xenophobic of the Shoanti clans, the fierce members of the Sklar-Quah are almost constantly at war. Whether by fending off the orcs from Belkzen or the Chelish invaders of the south, the Sun Clan has learned to use the heat and fire of the Cinderlands itself as a weapon.[18] Their burn riders revere the horse above all other animals. They dwell among the southern Cinderlands of the Storval Plateau.[2]

Life among the Skoan-Quah revolves around death. Whether they are fighting against undead, acting as guardians for the deceased among all the clans, or tracking the oral history of the Shoanti people, the enigmatic and sinister members of the Skull Clan sometimes trouble even the most understanding of their fellow Shoanti.[18] They dwell among the burial grounds of the eastern Cinderlands and the Mindspin Mountains.[2]

Members of the Tamiir-Quah are among the most territorial and secluded of the Shoanti people. The Wind Clan makes its home in the mountains of northwestern Varisia and the southern Lands of the Linnorm Kings, and may the gods help anyone who threatens these areas.[19][2] They generally only interact with outsiders when they raid lowlanders for supplies.[2]

Paizo published major articles about the Shoanti in A History of Ashes p. 66–73 and Inner Sea Races p. 40–43, and an article about Shoanti shamanic traditions in Disciple's Doctrine 24f.

Additional works published by Paizo Inc. in which Shoanti appears: