Languages are always undergoing changes, modified by time or distance. Over centuries, some transform to such a degree that they can be said to be a separate, distinct language, while others are wiped out with their speakers in the blink of an eye by catastrophic events. A language is considered truly dead if it no longer has a stable, living population of native speakers, even if written records of it still exist, scholars still study it, and certain immortal or undead individuals still speak it. 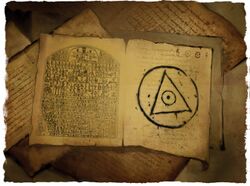 The archaic root language of northern Garund, Ancient Osiriani came into being over 8,000 years ago at the dawn of the Age of Destiny. Though different from modern-day Osiriani, it is still decipherable to speakers of the modern language. It has more complex pictograms than its modern counterpart, although there are not nearly as many words. Words and symbols in Ancient Osiriani can also have many more meanings than the modern language.[1] Legend holds that Thoth, the Lord of Divine Words and member of the Osirian pantheon, invented Osirian hieroglyphs.[2]

More than 10,000 Osirian hieroglyphs have been identified from all ages of the language's history. The glyphs' meanings have shifted over time, and some carvings use a code to foil thieves, or use symbols to represent sounds rather than ideas.[3]

Even though the language of the kingdom of Azlant has been lost for millennia, its linguistic legacy is carried on in such languages as Taldane, Polyglot, Hallit, and Varisian.[1] The elves of the Mordant Spire refused to talk to anyone in anything but this ancient language, and act as guardians of the tongue just as they oversee the last remnants of the ancient continent above the waves.[4][5] Phonemes from spoken Azlanti do not appear in modern Inner Sea languages.[6] Certain traditional Chelish operas were still written in Azlanti.[7]

The language of the Jistka Imperium that stretched across northwestern Garund and southwestern Avistan during the Age of Anguish and into the Age of Destiny, Jistka is remembered for forming the basis of the alphabets of many human languages. Skald, Taldane, and Varisian have numerous letters from the Jistka alphabet, and the Jistka numerals (where I is 1, V is 5, etc.) are still used by scholars and royalty for their most formal documents.[1][8]

The language of the Shory Empire was distinct and used runes for its written form. Sometimes Auran runes supplemented the written language. The language is extinct today.[9]

This language (pronounced tek-rih-TAN-in)[10] evolved with the founding of the Tekritanin League during the early millennia of the Age of Destiny, combining elements of many of the tribal languages spoken at that time in northern Garund. Many modern languages can trace elements back to Tekritanin, especially words concerning heat, desert, or governance.[1] When spoken, it features pointed consonants and clipped pronunciation.[6]

A woman possessed by the ghost of an ancient astrologer named Kubburum Ishmedagan, who was fluent in Tekritanin, was recently discovered by Pathfinders in Absalom. Sadly, the ghost was sent to Pharasma's Boneyard before a detailed study of his speech patterns could be recorded.[11]

Modern Giant, Varisian, and Shoanti contain elements of this truly ancient language spoken in the Thassilonian Empire before the coming of the Age of Darkness. Scholars remember it chiefly as the first language to develop three grammatical genders and for using a complex alphabet made up of three separate runic systems based heavily on Azlanti.[1][6]