Humans are the most numerous civilized humanoid ancestries of Golarion with a variety of ethnicities, and a stake in virtually every corner of the world.[1] Known for their adaptability and versatility, humans have throughout history been behind many of the largest and most prosperous of nations.[2]

No one truly knows what deity or creature first created the human race. According to alghollthu wall carvings, they were responsible for humanity's creation, although this claim is impossible to prove conclusively.[3]

The first great human civilization was that of Azlant, which arose over 10,000 years ago on the destroyed continent bearing the same name in the middle of the Arcadian Ocean. It was destroyed by Earthfall in -5293 AR[4], which ushered in the Age of Darkness. New great human civilizations did not arise again in the Inner Sea region until the Age of Anguish, when the Jistka, Shory, and Osiriani empires flourished in northern Garund. Old Man Jatembe and his Ten Magic Warriors refounded the practice of magic among humanity, while in Avistan, the first great civilization was founded when Taldaris unified the city-states of Taldor.[5]

The ascendancy of Aroden, the god of humanity, ushered in the Age of Enthronement, and the spread of human civilizations throughout Golarion and beyond.[5]

Distinct ethnic groups can be found throughout the world, each with its own unique culture and appearance. While mingling does occur, most humans fall into one of these groupings more prominently than the others.

The known human ethnicities of Golarion are as follows, grouped by continent of origin. 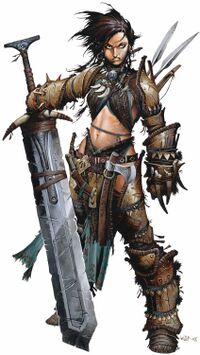 Amiri, a Kellid barbarian from the Realm of the Mammoth Lords.

Quinn, a Garundi investigator from Galt.

Crown of the World

The term humanity when used in the Inner Sea region refers not only to physical humans, but also includes the most populous, civilized near-human races such as elves and dwarves. The more savage races such as goblinoids, gnolls, and orcs, however, are not part of this classification.[9]

Through mostly magical means, small populations of humans exist on other planets in Golarion's solar system.

While largely uninhabitable, at least one human—the powerful wizard Eziah—lives on the Sun in a structure called the Silent Sanctum. Humans might also live in the magically protected Burning Archipelago.[10]

The inhospitable world of Aballon is dominated by constructs and robots, but the town of Horsethroat consists of humans and other sentient races from other worlds marooned in an ice well by mysterious magic.[11] 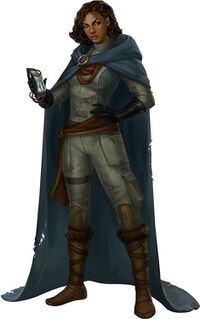 Humans, or a species of humanoid all but indistinguishable from humans, are one of the dominant races on the red planet of Akiton. Akitonians have red skin and are roughly divided into city-dwellers and desert barbarians. They are capable of interbreeding with Golarion humans. The greatest city of the Akitonians is the free city of Arl, which ages ago was conquered by travelers from Azlant on Golarion and still retains lingering elements of Azlanti culture.[12]

Eox is a dead world inhabited by undead humanoids, but in its distant past its living inhabitants were extremely similar to humans. Some theories suggest Eoxians may have even been the human race's progenitors.[13]

Humans live on at least two planets outside of Golarion's solar system, though they have no known links to Golarion's race.

The space-traveling people of Androffa were technologically advanced humans.[14] They created the android race in their image.[15]

Humans make up the vast majority of a distant planet called Earth, which is reportedly in the midst of a massive war.[16]