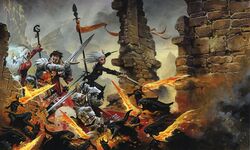 Brimoraks, or arson demons, are small, minotaur-like demons often associated with the demon lord Baphomet, though they are also fielded as infantry by demon lord Flauros.[1]

Brimoraks are also commonly summoned for combat purposes by mortals using conjuration spells, such as lesser planar ally or lesser planar binding, representing a high tier of power for those low-level spells, mainly due to their good defences, multiple abilities, and general combat effectiveness against enemies that are not resistant to fire.[2]

Standing around three feet tall, brimoraks tend to live only in parts of the Abyss where high concentrations of flames and smoke are found, but are very common in such places. Despite their small size, they are quite strong, and weigh about 200 pounds.[1]

Their associated sin is arson[3], and though immune, they endure the constant pain of the fire they live in, as well as their own boiling blood, a manifestation of the sins of arson it committed as a mortal.[1]

The only relief it experiences is a temporary one—after it uses its boiling blood as a breath weapon, or uses one of its fire-type spells.[4]

Many brimoraks believe that for every fire they set, they grow larger in stature. Scholars have yet to find any evidence of this.[5]