It is a place of annihilation and destruction, leaching life energy from all who come near it. A barren wasteland of emptiness with few surfaces, the Negative Energy Plane is the home of countless undead creatures, many of them intelligent and extremely powerful. In fact, the plane is the source from which all undead draw their power and un-life.[4][5][2] 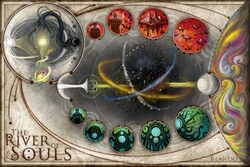 The Negative and Positive Energy Planes, at top left, in the context of the River of Souls.

The plane is saturated with negative energy that drains life from beings that rely on positive energy, including mortals, within moments; most who arrive without magical protection or planar attunement immediately turn to ash and become wraiths. Food and natural materials, such as mundane cloth and leather, rot immediately, and metal rusts away within days. It is inherently dark—natural light sources go out on their own—and frigid. Gravity is subjective and directional, but movement is a matter of will more than physical force.[2]

The plane mostly consists of bleak emptiness. The few exceptions include elemental pockets, where the plane intersects with the Elemental Planes, as well as a number of unique features.[2] 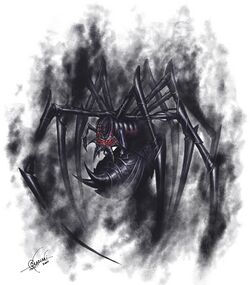 A nightskitter, a type of nightshade.

Incorporeal undead creatures, including the plane's most feared nightshades, dominate the plane.[5] Corporeal undead, such as liches and graveknights, also travel to the plane and meet or reside in protected settlements like Malikar's Keep.[2][6]

The most prominent natives of the plane are sceaduinars[7] and sceazirs,[2] who spawn from crystalline knots of negative energy that form strange angles.[5][2] Oblivions also coalesce from the entropy that courses through the plane.[2]

Other beings who visit or live in the plane include daemons, at least one danava, devourers, hunduns, umbral dragons, and void-ravaged survivors who have acclimated to the void. A few movanic devas voluntarily brave the plane as front-line defenses against its inhabitants.[2]