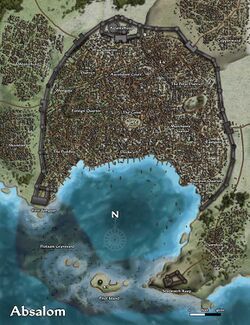 A map of Absalom with labelled districts.

Absalom is such a large city that it is divided into fourteen smaller districts, each of which is governed as an independent city by a district council.[1]

Azlanti Keep
Main article: Azlanti Keep
Azlanti Keep is a major fortification, and large enough to qualify as a city district in its own right. The keep is the home of the First Guard, the major element of Absalom's military.[3]

The Coins
Main article: The Coins
The Coins is Absalom's main commercial district, where all manner of goods are for sale at any time of day. It is also the location of the controversial slave pits of Absalom.[4]

The Docks
Main article: The Docks