Lizardfolk, also called iruxi amongst themselves,[1][2] are a reptilian ancestry of humanoids who dwell in many of Golarion's swamps and marshlands.[3] They are an ancient species, and once could be found living throughout Avistan and Garund. The expansion of other humanoid races and changing climate has pushed them into the margins of the world over the past few millennia. Not a warlike race, they often find themselves pitted against land-hungry humans, especially, of late, in the Mwangi Expanse.[4]

Lizardfolk's ties to nature make them excellent rangers or druids. Their great strength helps immensely if they follow the barbarian, fighter, or monk path, though they can also attack from stealth as a rogue. Iruxi oral tradition is kept alive by lizardfolk bards and sorcerers.[5]

Lizardfolk are primarily swamp-dwellers, and are good swimmers. In the water, they primarily propel themselves with their tails in a manner reminiscent of an alligator.[6]

Lizardfolk are cold-blooded, and cannot regulate their body temperature internally. As such, they are primarily diurnal and become sluggish during the night. They are also intolerant of low ambient temperatures, leading to their preference for warm and temperate environments. Temperature also determines the gender of the hatchling that emerges from an egg. Lizardfolk eggs subjected to both high and low temperatures over their incubation hatch into females, and lizardfolk thus need to carefully regulate the temperature of incubating eggs to maintain gender balance in future generations.[6]

Lizardfolk eggs are laid singly, and each female usually lays one egg per year. Young lizardfolk undergo puberty at 10 years of age, and thereafter continue to gradually increase in height and mass for the rest of their lives. Absent accident or injury, lizardfolk usually reach 60 to 80 years of age.[6]

On occasion, a lizardfolk is born with twice the size and lifespan of the members of the species. Termed lizard scions, these beings often rise to positions of power within lizardfolk society.[7] Another rare, although proportionally more common, mutation allows lizardfolk to alter their skin coloration to blend in with their surroundings. These lizardfolk are referred to as the unseen.[8] 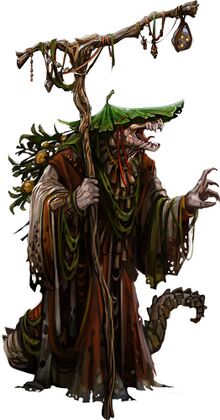 Lizardfolk are patriarchal, and their tribes are usually ruled by their strongest and most aggressive male member. Female lizardfolk are given the same rights and responsibilities as males, but their slightly smaller sizes, their role as egg-layers and the tendency for eggs to hatch into females more often than into males make them less likely to become tribal leaders.[9]

Lizardfolk settlements usually consist of a cluster of hollow mounds built on an island raised above the swamp, each with a single entrance covered by a flap to prevent loss of heat. A single mound is typically home to several lizardfolk of different families, who share their living spaces for warmth and companionship; individual families' living areas are separated by reed screens. A bed of coals in the middle of the mound provides heat, while a chimney hole allows the smoke to exit. A ring of sharpened stakes marks the edge of the village.[9]

Lizardfolk religious beliefs center on a form of animism, focused on the worship of natural spirits, their ancestors, and deities such as Gozreh. Religious life is typically led by shamans, who often pierce themselves with animal and occasionally lizardfolk bones to symbolize their close connection to nature. Although shamans are highly influential figures in lizardfolk societies, they rarely lead tribes in their own right.[9] Chaotic evil lizardfolk are known to worship the demon lord Zevgavizeb instead.[10]

Lizardfolk often domesticate and train dinosaurs in areas where their habitats overlap, which are usually managed by the tribe's shaman. Dinosaurs are used as either war animals and beasts of burden or worshipped as the embodiments of the tribe's ancestors, depending on the habits of the specific tribe.[6] Lizardfolk have also been known to ally with wyverns, sometimes even bribing them to serve them as winged mounts.[11]

Relationship with other races 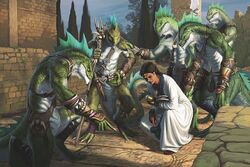 Lizardfolk are largely isolationist, and do not leave their territories without a specific purpose in mind. They tend to distrust humans due to their history of conflict over land and elves due to an unspecified betrayal spoken of in lizardfolk legend. However, lizardfolk consider dwarves to be good trading partners, although the two species rarely meet, and find gnomes acceptable due to their low impact on the environments they inhabit. Leadership of lizardfolk tribes is occasionally taken over by powerful reptilian beings such as nagas and dragons, whom the lizardfolk view as brethren. However, lizardfolk despise boggards, as they view their society as a degenerate mockery of their own.[9] 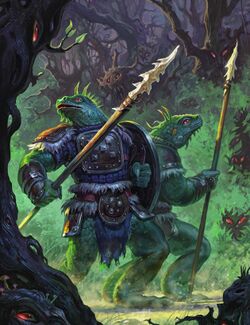 Two lizardfolk are ambushed in a forest.

Lizardfolk are an ancient species, possibly one of the oldest land-dwelling sapient species in Golarion, and were widespread across Golarion long before the origin of humanity. Their exact ancestors are not known, although the lizardfolk believe themselves to be descended from the dinosaurs. Ancient lizardfolk societies inhabited swamplands and rivers similarly to their modern descendants, and had little contact with each other. However, they are known to have engaged in large-scale projects to divert rivers to flood dry land to create wetlands to inhabit, and many of the marshes and swamps they created remain as such in the modern day.[8][12]

Lizardfolk society went into decline after the arrival of humans and other warm-blooded mammalian species. The lizardfolk found themselves unable to keep pace with rapidly breeding mammals, and were gradually driven deeper into the swamps as the younger species became the dominant inhabitants of their former lands.[12] Lizardfolk civilization was further harmed by the darkness and cold that followed Earthfall, which caused the loss of entire generations of eggs. Certain tribes, unwilling to passively allow other species to overtake them and to risk extinction should the swamps be completely drained and settled, used shamanic magic to alter themselves into a new breed of lizardfolk known as the sandfolk that would be able to survive in arid deserts.[8]

Due to their isolationism and declining numbers, lizardfolk often have little contact with other societies.[8] Common in the Mwangi Expanse, lizardfolk also dominate the southern part of the Sodden Lands,[13] parts of the River Kingdoms,[4] and the region of Droon in southern Garund.[14] They are also common in the remote parts of Mediogalti Island[15] and the Valashmai Jungle.[16]

The montane forests of Garund are home to subspecies of lizardfolk known as the cliffborn, who have the ability to climb up vertical surfaces in a manner similar to geckos.[8]