This page contains spoilers for the following products: Feast of Ravenmoor.

Ghlaunder (pronounced GHLAWN-dur)[1] is the demigod of parasites and disease. His symbol is that of a blood-engorged mosquito.[2] Other symbols associated with Ghlaunder include a circular maze-like pattern.[3]

Ghlaunder is an enemy of Desna, who accidentally released him from his cocoon on the Ethereal Plane long before mortals existed.[4][5] Who or what placed him there is unknown. Some speculate that he was grown in the corpse of a slain god, while others believe him to be the corrupted scion of another evil deity.[6] 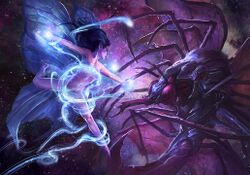 Ghlaunder is depicted as a giant, monstrous mosquito, who visits Golarion to feed on the heart blood of his faith's truly devout.[2]

The Gossamer King's followers often pose as clerics of other deities in order to infiltrate small communities. Rather than destroy them outright, the faithful of Ghlaunder seek to spread corruption from within and subtly move the unknowing towards the worship of their god. Rather than cause such a group's downfall, the priests wish to subtly live off them as long as possible. If their true purpose is ever exposed, they seek to justify their existence in the natural order, arguing that infections and parasites help cull the weak from the herd.[2] To aid their subterfuge, cultists may refer to Ghlaunder by obscure titles such as: 'the Tender of Dreams' or 'the Dream Tender'; 'the Slumberer'; or the 'Dormant Dreamer'.[7]

Others travel the world, planting sicknesses, or exploring strange, monstrous lairs in the hopes of discovering new diseases and spreading them around Avistan and Garund. Devoted druids and rangers often form special bonds with vermin of all kinds, making it easier for them to affect the creatures with their magics.[8][9] He is sometimes worshiped by those who consume blood and fungoid creatures.[10] 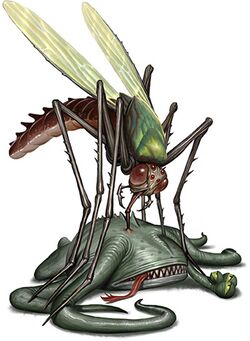 Ghlaunder depicted feeding on a froghemoth.

A small cult of the Gossamer King's is said to reside outside the Korvosan town of Veldraine, hiding in an ancient Thassilonian ruin. There they breed a race of poisonous stirges, waiting to release them against those who do not follow their god.[11] Another cult exists in the village of Ravenmoor.[12]. An isolated cult in the Mwangi Expanse raises giant mosquitoes, fed with their own blood, in accordance with the apocryphal unholy text, The Sipping Sacrifice.[13]

His priests have recently learned of a form of monstrous cockroach found in Casmaron and eastern Avistan known as the Keleshite venomroach. They collect these mildly-poisonous vermin, and release them to plague small communities, seeing it as a furtherance of their god's infectious will.[14]

Paizo published a major article about Ghlaunder in Inner Sea Faiths, and a in-universe story about his discovery and release by Desna in The Windsong Testaments series, The Beauty of Horrors.