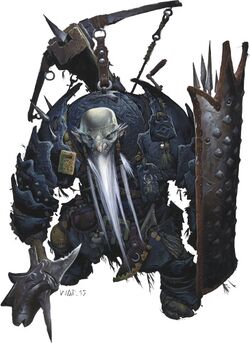 Droskar is the patron deity of duergar.

Droskar (pronounced DROH-skar)[1] is a member of the dwarven pantheon and the patron deity of the duergar.[2] He believes that sufficient toil leads to eventual success, and that those who fail simply were not trying hard enough. In the pursuit of this goal, Droskar believes that one should be free to do whatever is necessary to accomplish one's goal, even if that includes lying, cheating, exploiting others, or even worse, committing crimes.[2] His unholy symbol is a stone arch with a fire burning beneath it.[3]

Droskar was originally one of the greatest student smiths of Torag, until it was discovered that he had been copying his work from another whom he had enslaved. For this, he was cursed by the Father of Creation to never be able to create an original work and cast from the dwarven pantheon, but not before Droskar killed his captive, who would never be able to take his place at Torag's forge. Rejected, he searched for followers of his own, promising them salvation in return for ceaseless work or simply enslaving them. None of these helped him, however, or inspired any originality within the god.[3][4]

After Earthfall, Droskar heard the prayers of the dwarves who had refused to follow the Quest for Sky and chose to remain in the Darklands. Left behind by their kin and abandoned by Torag, they cried out for help against the enemies that surrounded them. Droskar offered them power and protection, allowing them to reclaim their shattered empire in exchange for eternal servitude. The dwarves saw the trade as fair, and as they accepted Droskar's patronage, their skin turned grey and they became Droskar's chosen people, the duergar.[4]

Droskar resides in the Abyss where he has a purgatory of a realm called the Ashen Forge.[5]

Droskar appears as a male dwarf towering over all beings that he addresses. His skin is ash-grey, scarred by burns, and his hair and beard are black smoke flecked with embers. He wears a forge apron made from red dragon hide that does not cover his heavily muscled arms and charred hands and forearms, where the scabs on his skin swirl into flame-and-chain patterns. He wields his forge hammer Karandosh in one hand and the Soulchain, which can drag any creature across the planes into his presence, in the other.[4]

Droskar views Torag as a hypocrite because Torag commands legions of celestial servitors, while he condemns Droskar for slavery. Most dwarves despise Droskar and ostracise or attack his worshippers, who in turn enslave dwarves when possible. The only dwarven god who harbours any sympathy for Droskar is Dranngvit; while Grundinnar hopes to reconcile him and Torag and bring him back to the pantheon.[4] 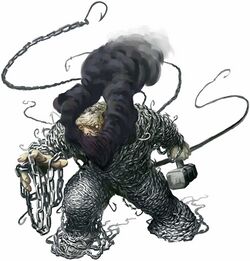 Since the Age of Darkness, Droskar's church has been the state religion of the duergar. On the surface of Golarion, the rare followers of Droskar tend to be individual ascetics who devote their lives to their work or study, or small settlements desperately struggling in harsh environments. They are most often found in Okeno, the Hold of Belkzen, the Sodden Lands, and especially Druma, which boasts the highest number of Droskar's worshippers in the Inner Sea region outside of Nar-Voth. His emphasis on the right of the powerful to dominate the weak resonates well with wealthy plutocrats across Golarion.[2][3][4]

The rise of Droskar's cult also saw the first appearance of an undead monster associated with such endless toil: the forge spurned.[6]

It is thought by many dwarves that followers of Droskar have hidden away the powerful dwarven major artifact called the Axe of the Dwarvish Lords as Droskar's church see this artifact as a great threat to their god's mission.[7]