This page contains spoilers for the following products: PFS #46-Requiem for the Red Raven. 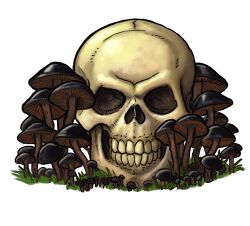 The symbol of the Darklands.

Just because a cavern or dungeon is deep does not mean that it is part of the Darklands. Most such places are simply natural or artificial caves that connect only to the surface and do not delve any deeper. In order to truly qualify, an underground location must possess connections to the greater system of tunnels and caverns of Nar-Voth or Sekamina. Although there are many entrances to the caverns of the Darklands, a few stand out either in size, notoriety, or both.[1][2]

This entrance is located in the northeastern Aspodell Mountains of Andoran, and was exposed two centuries ago in an earthquake. The caverns themselves are inhabited by dangerous vermin, kobolds, duergar, and undead, although the main denizens are numerous tribes of gremlins and other subterranean fey.[1]

Caves of the Craven

Main article: Caves of the Craven

These caves are located in Varisia's Calphiak Mountains and are plagued by large numbers of goblin tribes.[1]

In the center of the continent of Casmaron lies the land-locked Castrovin Sea, the main trade route for merchants in that part of the world. The dangerous deep waters of the sea are home to numerous islets and rocky outcroppings believed to have connections to the Darklands, but only the fiercely territorial tribes of locathahs and merrows know for sure.[3]

When the dwarves first strove to reach the surface of Golarion during their Quest for Sky, they drove many enemies before them. The most numerous of these were the orcs who broke through in countless places across Avistan. The first and greatest eruption came at Deepgate in what is now the Hold of Belkzen. It was here that the orcs made their only successful stand against the dwarves by building a large fortress of stone and iron to seal off the tunnel exits. It still exists today.[4]

High in the Fog Peaks of Galt lies a building with a dark past, even by the blood-soaked standards of this anarchic nation. Built to house political prisoners, it was soon discovered that its deepest cells connected to tunnels that led even further below.[4]

In the northern expanses of the Mwangi Jungle lie the ruined remains of a forgotten city. Half-submerged in brackish water, the area is overrun by skum from the Darklands, a good sign that there is a strong connection to Nar-Voth nearby.[4]

In the far north of Avistan lies the Realm of the Mammoth Lords, a brutal land of great beasts and walking fossils. The Tusk Mountains stretch through its center and contain the Earth Navel, a giant pit shaped like an inverted ziggurat. At the lowest level is a small hole which leads to the caverns of Nar-Voth. Supposedly this entrance is heavily guarded not only by the local megafauna, but also by a host of undead warriors who attack anyone not obeying the correct rituals and formalities.[4]

The ruins of the Thassilonian bridge known as the Irespan in the Varisian city of Magnimar contain a largely secret entrance to Nar-Voth. One of the lower chambers of the Crow, one of the freestanding pilings in Outcast Cove, connects to a mushroom- and fungi-covered cavern below it, but is only accessible via magical flight or wall-climbing.[5]

A vast crevasse with sheer sides the Jackal's Maw drops all the way from the heights of the Brazen Peaks in Katapesh to the depths of the Darklands and is an especially dangerous entrance to the realms below. Not only is it a sacred site to local gnoll tribes but the sacrifices they throw into the Maw attract all manner of dangerous Darkland creature.[6]

From the Shoanti term meaning "steps into hell," this perfectly circular pit is located in the Kodar Mountains of northern Varisia. A set of spiral stairs run around the edge of the hole, but end after a few hundred feet. Beyond this point it is necessary to climb the sheer walls or fly. Few people know how deep the Mobhad Leigh actually is, although some rumor that it is so deep that it bypasses the region of Nar-Voth completely and opens directly into Sekamina.[7] 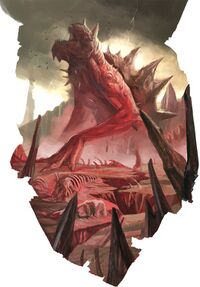 The Tarrasque emerges from the Pit of Gormuz.

Easily the most legendary entrance to the Darklands, the Pit of Gormuz lies far to the east, in the continent of Casmaron. Lying deep in a wilderness, it is at least 20 miles wide, a jagged tear in Golarion said to have been the site of the lost city of Ninshabur. According to myth, the goddess Sarenrae cut the world open here to imprison the Rough Beast, Rovagug.[7]

Set on the banks of the Asp River in Osirion, the pyramid is the tomb of Kamaria the Brazen, the only pharaoh known to have openly worshiped Rovagug. Some say that followers of the Rough Beast still control the corridors and trap-filled rooms in the interior of the pyramid, and that a central shaft drops down hundreds of feet to Nar-Voth. At its base is said to be the base of an especially violent tribe of grimlocks who engage in trade of a most nefarious sort with the cultists above.[7]

The Whisperwood in Cheliax has a dark, tangled heart, a place where precious little sunlight filters through primeval growth. Known as the Scar Thicket, this undergrowth-choked region is home to huge colonies of monstrous bats, vicious insects and deformed animals. At the center of the thicket, huge mushrooms and other deformed fungi dominate the landscape, providing a home for a rare tribe of surface-adapted vegepygmies. Twisted tunnels lie beneath them, reaching down into Nar-Voth, connecting it to the Midnight Jungle.[7][8]

During the war of Chelish expansion (4305 - 4410 AR) a company of soldiers were lost in deep caves in the Uskwood of Nidal. They perished there to a man, slain by creatures of the Darklands. Soon thereafter the Umbral Court sent emissaries and after years of trying, finally made peaceful contact with the inhabitants there. Ever since the Shadow Caverns have been Nidal's access to the lightless realm below, fostering a growing slave trade with the cruel races of the Darklands.[9]

Built by the dwarves upon their arrival on the surface world, these 10 mighty fortress-cities can be found throughout Avistan and Garund. Presumably each still contains the connection to Nar-Voth that the bearded folk emerged from, although since most are no longer held by the dwarves, or are totally in ruin, it is hard to prove.[9] The last four still in dwarven hands include Dongun Hold in the Mana Wastes, Highhelm in the Five Kings Mountains, Janderhoff in Varisia, and Kravenkus in Taldor's World's Edge Mountains.[10]

It is a little-known fact outside of dwarven circles that the orc capitol of Urgir in the Hold of Belkzen was once a dwarven Sky Citadel. As such, it still holds a secret entrance to Nar-Voth, a fact that the orc leader, Grask Uldeth of the Empty Hand, guards jealously.[9]

Built by the Whispering Tyrant on the Isle of Terror in Lake Encarthan lies the extensive dungeon known as the Wizard-King's Pit. At the center of this complex, built as a trap for the Azlanti hero Aroden, lies the Well of Sorrows, a grotesquely decorated shaft. Terrible undead are said to still guard an entrance to deep Sekamina here.[11]

A secret entrance to the Low Highway is located in the Pathfinder Society-owned Woodsedge Lodge in Galt.[12]