Wyrmwraiths are the spectres of dead dragons who refuse to accept death or have an irrational fear of moving on to the afterlife.[1][2] 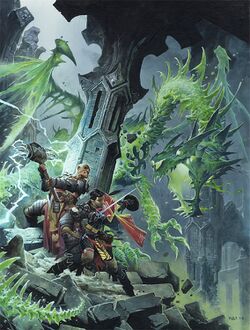 Wyrmwraiths typically haunt their former lairs or locations where they can hide from the sunlight, and are drawn to places associated with death. The blight and malice of a wyrmwraith are always felt in its lair, even in its absence. Unless a wyrmwraith is destroyed, its territory often becomes a lifeless wasteland for miles.[2]

Still displaying the draconic instinct to protect their homes, wyrmwraiths kill trespassers near their lairs and turn them into dread wraiths, carving out territories populated by undead servitors. They send their minions to collect anything and anyone with useful knowledge or power. Captured individuals who please the wyrmwraith can expect to become powerful undead, while the others are turned into more dread wraiths.[2]

Wyrmwraiths no longer hoard wealth but brood with an unrelenting hatred of all living things, especially living dragons, whom they consider their mockeries, as well as a loathing of their accursed state. They seek to reverse or improve their undead condition, but still fear ultimate death.[2]

Some wyrmwraiths who have spent more time as undead than as living creatures are driven suicidally insane. They rain down destruction at night, knowing that they will eventually be destroyed.[2]

Wyrmwraiths occasionally enter alliances with necromancers or dark cults. They still see all other creatures as beneath them and will inevitably betray them once their usefulness ends.[2]

In battle, wyrmwraiths prefer to target divine casters, knowing the threat divine magic poses to them and seeing it as a chance to retaliate at the gods for what they have become. Wyrmwraiths see their undead minions as nothing more than expendable pawns.[2]

Either by the conversion of a particularly powerful dragon into a wyrmwraith, or by the growth of a wyrmwraith over thousands of years, legendary examples of the creature exist and are termed elder wyrmwraiths.[3]