Ragathiel (pronounced rah-GATH-ee-el)[2] is an empyreal lord—a good servant of the gods who through transcendence has achieved some small measure of divine power—known as the General of Vengeance.[3][4] His portfolio includes chivalry, duty, and vengeance, and his holy symbol is a bastard sword crossed with a crimson wing.[5] He makes his home at the base of the mountain of Heaven, in his eponymous fortress, a magnificent steel structure designed to withstand a thousand-year siege if need be.[6][7]

Ragathiel takes an active role in the battle against Hell's fiendish legions. He shines at the head of his army, a figure of golden light cleaving through the ranks of devils that face him. Soldiers of all kinds, but particularly knights, pay homage to Ragathiel and pray for his virtue and wrathful strength in battle. Those who have taken vows, especially those of duty or vengeance, hold Ragathiel as their ideal, and his agents sometimes assist those who have been grievously wronged and now seek righteous vengeance.[5][8] 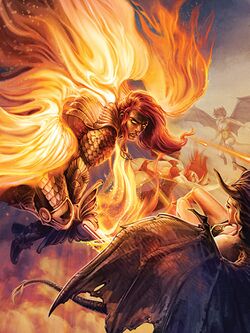 Ragathiel leads the crusade against evil.

Ragathiel is a tower of glorious might. He stands almost 20 feet tall, and five lofty burning wings stretch from his back. The General of Vengeance once had six wings, but one was severed, torn from his body by the archdevil Dispater—Ragathiel's father.[5][8]

As strange as it may seem, Ragathiel is the son of Feronia, a demigoddess of the Plane of Fire, and Dispater, the Father of Dis. He was conceived in a brief tryst (lasting only a few centuries), after which his mother took him out of Hell.[9]

Ragathiel's tainted heritage has left him with a wrathful heart, and the angel struggles constantly to master his baser impulses in service to the light. For thousands of years he strove to prove himself to the angelic choirs of Heaven. In the Maelstrom he wrestled for 16 years with a monstrous evil serpent whose scales wept acidic blood until he was able to choke the life out of it. He led an entire army against one of the iron fortresses of Avernus and burned the castle to the ground with holy fire, single-handedly maiming Infernal Duke Deumus in the process. Finally the other empyreal lords agreed to admit Ragathiel into their ranks, and now they appear to trust the angel completely—though that trust took centuries to develop.[5][8]

At some point in history, Ragathiel destroyed Typhon, the original ruler of the first layer of Hell. He may have been manipulated into doing so by the schemes of Asmodeus to punish Typhon for his indiscretions.[10]

Ragathiel was once served by the Hand of the Inheritor, an angel who now acts as the goddess Iomedae's herald. Then known as the Hand of Vengeance, this angel asked to be reassigned to Iomedae after the death of Aroden.[11]

Ragathiel is commonly worshiped by the avowed, knights, soldiers, the wronged, and the empyreal lord employs aasimar, paladins, blink dogs, and kirin as his most common servants.[5]

The holiest time for Ragathiel's followers is the brief moments before and after a battle. The faithful ask Ragathiel's eyes to fall upon them and for his wings to shield them. This is also a standard greeting and farewell among worshipers.[12]

Followers of Ragathiel commonly wear red and silver clothing. Many also don an ornament or sigil the color of flames, typically on the helmet.[12]

Ragathiel has a small but old cult in Magnimar, a city known for its many mystery cults revering various empyreal lords.[13]

Among the most lawful and goodly followers of Ragathiel are his crimson templars, ruthless assassins who are willing to kill in the name of good while saving others from having to perform such violent tasks. Their intense affiliation fortifies them against flames while also empowering them with heavenly fire, and can grant them five-winged flight similar to their patron's.[14]