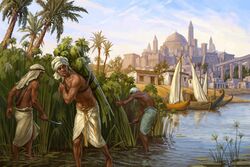 Tephu, the City of the Reed People[1] is a city in the Sphinx Basin region of Osirion named for the reed-covered marshlands where the rivers Crook and Asp join. The city's major industry is its near-monopoly on the harvest and processing of the abundant papyrus. Consequently, the city houses the largest academy of scribes in Osirion, who have preserved a massive catalogue of records from the time of its founding in -1605 AR by Djederet II, pharaoh and cleric of Nethys. Tephu's current leader is the preservationist governor: Haty-a of Tephu Deka An-Keret.[2][3]

Paizo published a major article about Tephu in Shifting Sands.