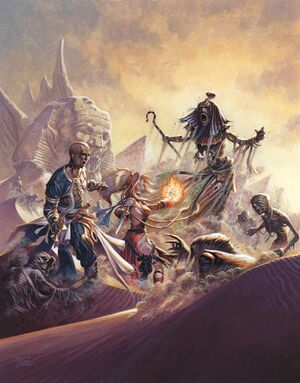 Combat near the Sphinx Head

The Sphinx Head or Black Sphinx is the largest sphinx statue in Osirion, located in the desert between Shiman-Sekh and the Junira River. It is constructed from black granite, and has sunk up to its chin in the desert sands.[1] Its features are believed to be those of the Sky Pharaoh, Menedes I, staring into the center of Osirion.[2]

When Osirion fell under the rule of Qadira in 1532 AR,[3] the sphinx proved to be an unwelcome reminder of the ancient culture that the new rulers were trying to suppress. During their rule, the face was damaged beyond recognition. With the restoration of the native Osirian dynasty by Khemet I, magic was used first to identify the missing features, and then to restore the sphinx's face to its original condition.[2][4]

Scholars have long speculated about the reason behind its construction. A door was recently discovered in the head, leading to what is believed to be a royal tomb. Exploration has proved to be difficult, as the interior is completely lacking in air[5]—creatures from the Elemental Plane of Air were tasked by the Sky Pharaoh with protecting his tomb by creating a vacuum inside.

The lack of air has also protected the tomb's contents from decay. There are dozens of chambers containing great treasures, including many rare books and possibly unique tomes which have not survived anywhere else. The treasure, and the sarcophagi of the royal family, are protected not only by the elementals but also by the animated bodies of the Pharaoh's personal guard.[6]

Since Khemet III opened up the country to foreign explorers, brave adventurers have started taking an interest in the Sphinx's Head again.[4]