The Footprints of Rovagug is one of Osirion's six regions, a region of sandless desert badlands in the country's south-west, bordered by the Scarab River in its north and the Parched Dunes in its west.[1][2] The country's only two volcanoes, Sokar's Boil and Asuulek's Mouth, are in this region; and Osirian nobles sometimes travel here to partake of the healthy spring waters,[3] like those at Djeneg.[4] In the past, the region produced copper, silver, iron, tuff, and pumice; however, most mines are long-since played-out.[2]

The region is one of ash, clay, and dirt: a sandless desert filled with hardened "three-toed" lava flow features—the Footprints of Rovagug, from which the region's name originates—across its face and menaced by two volcanoes, one active and the other long quiescent.[2] Breaking the monotony of destruction and despair, a number of hot springs well up throughout the landscape, though most are poisonous.[2]

Flowing water does exist in the region, however, in the form of the Scarab River, which runs west to the Junira River and marks the region's northernmost border with the Glazen Sheets, that are part of the Osirian Desert region of the country. The river's source is a group of springs located high among hills and it provides sustenance to beetles, and birds with razor-sharp feathers, the stymphalides.[5] 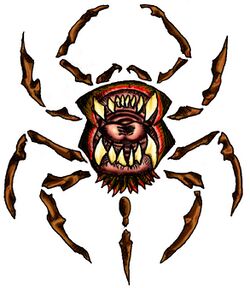 Many cults of Rovagug flourish in the region.

The Footprints of Rovagug are also a hardened lava flow feature that gives the region its name.[5] The "Footprints" are distributed throughout the region, each having an essentially similar shape appearing like a gigantic three-toed animal's foot.[5] The prints, however, do not lead in a particular path, seldom point in the same direction, and are spaced at odd distances.[5] Cultists of Rovagug believe that a sacred monster created the footprints by stomping with such strength that lava was released due to the pressure of the pressing feet; however, most people in Osirion believe they are merely hardened lava flows.[5] A number of the footprints are menaced by violent hermits and others have cultists of Rovagug for caretakers.[5] For example, at the site of six adjacent footprints, the Worldbreaker's Stride, a small cult of humans, gnolls, and partially-tamed giant scorpions assaults non-believers.[5]

The region also has a number of sites, other than the physical "Footprints" of Rovagug. These sites include temples and tombs built by long-dead pharaohs in the Barrier Wall.[2] Some of those sites were destroyed by earthquakes or volcanoes, but others remain.[2] Mines like the Aphet Mines also dot the landscape, although most have played out.[4] Mephits converge at Mephit Spring, or at least they did until a demon recently seized the valley.[5] Although two volcanoes remain active or at least will soon return to activity, at least one other, the Klarwa Fountain, lies extinct.[5] Even some human cities in the area have died, like old Ekbet, now known as Gralgor-Ot by its remaining sphinx inhabitants and the city's remaining magically enhanced guardians—the living monoliths.[5]

Major settlements in the area include Aphet East (350 souls reside near this oasis); Djeneg (a mineral spring city of 187 inhabitants); and Tar Kuata (78 inhabitants in this monastery of Irori in the Barrier Wall mountains).[2]

In addition to humans and dwarves, the region hosts mephits, manticores, criosphinxes, hierarcosphinxes, maftets, and wyvrens.[2] Behirs and lamias live among a number of the hot springs.[2] The region is also infamous for its relatively large amount of cults, including those of Urgathoa, Lamashtu, and Rovagug, which flourish in the wastes.[2]

Paizo published a major chapter regarding the Footprints of Rovagug in Osirion, Legacy of Pharaohs.